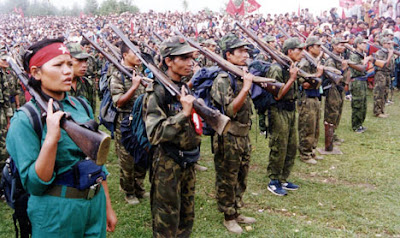 I am among the many international supporters of the Nepalese revolution. Ever since the UCPN(M) took the heroic decision in 1996 to launch the People's War we have watched in astonishment as this party made an important and unique contribution to proletarian history when it appeared that globally communism was on the retreat. The Soviet Union, in Comrade Castro's words had: "committed suicide' and China had decisively become state capitalist and so there was no socialist support base to turn to.
Everywhere it appeared that capitalism was triumphant and yet against this tide of reaction Nepalese comrades stood up and launched the first communist revolution of the 21st century. That a small, landlocked country in SE Asia within a matter of years would become the crucible of revolution, that would set an example to oppressed people everywhere was inspirational.
Let us be clear the odds against success were formidable, starting from a small guerilla band in the west of Nepal, where exploitation was most intense and multi-faceted, it transformed into a professional, battle-hardened army that consistently bested the much larger and better armed RNA, even after it was further swollen after 2002 by American dollars. By 2005 it controlled 80% of the country with the RNA confined to the urban areas.
Without the PLA the systems of dual power, people's courts, expropriation of feudal lands &c could not have survived. Just as the bourgeoisie have a repressive apparatus which protects and guarantees their class interests then so must the proletariat have an armed wing to defend and extend its interests. As Mao put it:
"Political power comes out of the barrel of a gun."
Nepalese comrades always understood and applied this maxim and it is a plain fact that without the PLA, without the sacrifices of its combatants and supporters among the people nothing could have been achieved. Nepal would still be living under a despotic, feudal monarchy in thrall to Indian and increasingly American imperialists in an unchallenged neo-colonial dependency.
That is why the status quo parties and their foreign backers have been so remorseless in first trying to destroy and failing that to dissolve or dilute the PLA. What they could not win on the battlefield they have sought to gain at the negotiating table or through clandestine 'gentlemens agreements' with an increasingly compliant party establishment.
This last scenario appears to be most likely as we have been softened up progressively in the last year  seeing the gains and systems of dual power eroded and dismantled culminating in the awful decision yesterday to hand the cantonments and the weapons to the NA and to put the ex-PLA combatants effectively under a form of military arrest.
It is a military and political axiom that weapons are never surrendered before the war is over. Protracted People's War did not end in 2006, the armed phase was suspended and the struggle re-located to the terrain of the political as a tactical move to enable the urban masses to be brought into the revolution.
Thus this decision of the party establishment indicates either stupidity or treachery. It certainly makes the task of enacting and implementing an 'anti-imperialist, anti-feudalist constitution more difficult if not impossible.
And to see NA soldiers entering the cantonments fingers on triggers prior to taking charge of the weapons containers symbolizes a dramatic set-back for the Nepalese revolution and the aim of building Naya Nepal.
Peter Tobin

By claiming that the Nepali Maoists launched the “first communist revolution of the 21st century,’ Tobin is blind to the existence of a protracted people’s war led by the CPI (Maoist) in neighboring India that is growing politically and militarily in the face of relentless attacks by the Indian state.

Tobin is deluded when he claims that the “Protracted People’s War did not end in 2006,” the “armed phase” was just “suspended.” If the PLA had retained its bases in the countryside and negotiated ceasefires with the Nepal Army (as the Chinese Communist Party did on many occasions in its war of national liberation), those would have been “suspensions” of the armed struggle. But that is not what happened. 19,000 members of the PLA left their bases, entered cantonments scattered throughout the countryside, and locked up their weapons under lock and key under the watchful eye of the UN and the much larger Nepal Army. The revolutionary forms of organization in the liberated areas were dismantled while the Prachanda and Bhattarai sections of the UCPN (Maoist) played parliamentary politics with reactionary parties that gained nothing for the oppressed and exploited of Nepal. This is what political and military capitulation looks like.

Tobin, like the Kasama group in the U.S., until fairly recently, essentially argues that ending the people’s war was necessary in order to “enable the urban masses to be brought into the revolution.” Kasama argued for several years that this strategy, which was allegedly leading to an insurrection in Kathmandu under Prachanda’s leadership, was an “anti-dogmatic” breakthrough from prior Maoist thought. In fact, revolutionary experience in countries such as Nepal, India and the Philippines, in which 70-90% of the population reside in the countryside, indicate that protracted people’s war based in the rural areas is the main form that revolution takes, with support from the cities, which becomes increasingly important as the people’s war advances closer to the cities. With this understanding, it was all the more criminal that Prachanda and Bhattarai ended the people’s war in 2006 when 80% of the countryside had been liberated and the coordination of armed struggle in the area around Kathmandu there was a pressing question.

The good news that significant numbers of PLA members are demanding their “voluntary retirement” funds, denouncing corrupt commanders who are supported by Prachanda and Bhattarai, and are leaving the cantonments. Hopefully, they will be an important part of the revolutionary regroupment that is going on in the UCPN (Maoist), YCL and mass organizations.