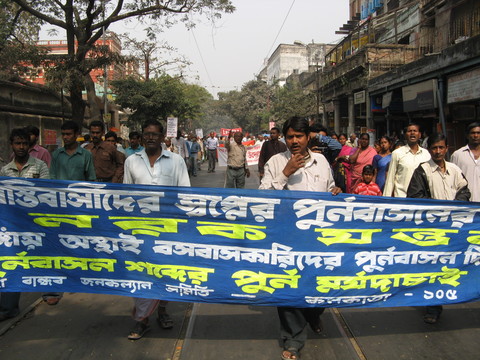 The unforgivable crime of the homeless in Nonadanga is that they formed an organization without links to the CPI(M) or the TMC. The Indian state will listen to the grievances of the dispossessed only if they approach the government via one of the standard voteshops. Otherwise, the temerity of the poor in organizing themselves independently will be punished adequately. The west Bengal government is following this trodden path.
What is alarming is the power granted to the police. The images which emerge from the police action against the homeless of Nonadanga : a little girl behind bars for nine hours, a pregnant women beaten up, arrest of demonstrators even before they started a meeting at College Square, false cases concocted against bhadralok supporters of the movement, including a case against a bright, young scientist, Partho Sarathi Ray, regarding acts purportedly perpetrated by him at a time when he was at his workplace, as evidenced by written submissions of his colleagues.
A milieu is settling in the state with flashes of uncanny resemblance to the authoritarian smothering of democracy in the seventies. The police brought pressure to bear on the intelligentsia and the judiciary, at that time, to support their lawlessness on the ground of suppression of Naxalite violence. The judiciary turned a Nelson eye towards palpably false cases and custodial torture. Today, the excuse is apprehension of Maoist violence. The right to free speech and assembly is being rudely curtailed. While prominent intellectual workers like Sankho Ghosh, Ashok Mitra and Sunanda Sanyal have protested against such curtailment, the spoils of office seem to have paralysed the vocal chords of the horde of pro-‘paribartan’ glitterati who protested against the authoritarianism of the CPI(M) but are silent now.
Nonadanga marks a water-shed in the increasingly impatient, partisan and highhanded style of governance which has started to characterize our unfortunate state.
1. The movement facing this angry suppression was open and peaceful. Indifference of the government and a highhanded police forced the aggrieved towards civil disobedience, they sat down on the road. This is the most that happened. The reaction of the police was disproportionate.
2. The disproportionate reaction of the police can only be explained by political motivation. Nonadanga has been apportioned among big commercial enterprises and is entering a construction boom. The materials supply and ‘protection’ rackets are controlled by a syndicate which forcibly takes ‘vounteers’ from destitute households and trains them into mafiosi. The overlord, named Megha, was a CPI(M) man till a little time before the assembly elections and then switched over to the TMC. Any independent movement jeopardizes the stranglehold of such a syndicate – party nexus on the inhabitants and the police are obliging the nexus by putting down the irritant growth.
3. The police have invented a Maoist conspiracy, having presumably found some such ‘information’ about one or two of the bhadralok supporters. The standard fare to satisfy (and intimidate) intellectual dissent will, from now on, be suspected Maoist connections.
The government is about to take a course veering to authoritarian suppression of all people’s movements (and publications) not approved by the political authority as allowable.
Two thoughts for bhadralok supporters.
One, oppose all curtailment of democracy without discriminating among political labels handed out by the police.
Two, solidarity is admirable but should not be exercised in any way which facilitates branding of people’s movements by the administration.