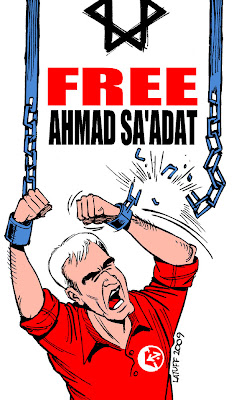 Ramon prison management transferred hunger striking Palestinian prisoner and leader, Ahmad Sa’adat to Ramle prison hospital on Sunday, April 29. Sa’adat is General Secretary of the Popular Front for the Liberation of Palestine, and has been in isolation for over three years in Ramon prison. He has been on hunger strike since April 17 with now over 2000 Palestinian prisoners.

PFLP prisoners were previously offered that Sa’adat’s isolation would be ended in exchange for them ending their hunger strike, which the prisoners refused, saying they are committed to achieving the full demands of the strike in unity with all prisoners, including ending all isolation, ending administrative detention, and supporting rights to family visits, education and media for prisoners.
Sa’adat has lost 6 kilograms so far on this hunger strike, which comes only short months after his last extended hunger strike, from September 27-October 20, calling for an end to isolation and solitary confinement. Hundreds of prisoners joined this strike, which ended with false Israeli promises to end isolation which were then ignored following the prisoner exchange. Sa’adat lost tens of kilograms during the previous strike.
Sa’adat was abducted in 2006 from the Palestinian Authority’s Jericho prison, where he had been held with five other prisoners, including four of his comrades under US and British guard since 2002. His imprisonment had been ruled illegal by the Palestinian High Court and he was elected to the Palestinian Legislative Council while held in Jericho. On March 16, 2006, Israeli occupation forces attacked the prison and abducted Sa’adat and his fellow prisoners. He is now one of 19 Palestinian prisoners in isolation.