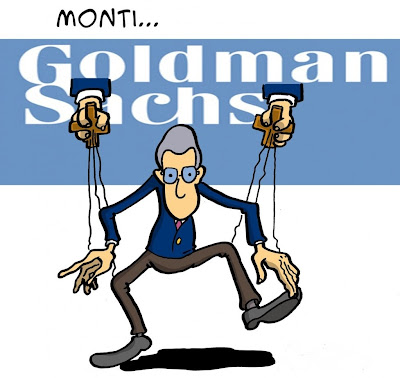 Red Salute from Democracy and Class Struggle to Italian Comrades on your Day of Liberation from Fascism - smash capitalism to make sure Fascism never returns.

News from Italy about the Mafia and Berlusconi and the Italian gangster capitalism now administered by Monti on behalf of Goldman Sachs and the ECB.

(ANSA) - Rome, April 24 - Italy's Supreme Court said on Tuesday that Senator Marcello Dell'Utri, a former close aide of Silvio Berlusconi, was the intermediary with the Mafia for the ex-premier, handing on "substantial sums" of money for protection.Dell'Utri's previous conviction in a Palermo appeals court for which he received a seven-year jail sentence was overturned by the court in March.The court ordered a retrial.In the 146-page court document released Tuesday, judges said that there were ample testimonies regarding Dell'Utri's alleged Mafia dealings, specifically in the 1973 hiring of the premier's supposed stable manager at his Arcore villa, Vittorio Mangano, a convicted Mafioso. Mangano was allegedly hired to protect the future media magnate's family after a wave of kidnappings of industrialists or their children.The motivation for the agreement, said the court, was to "guarantee the freedom of movement and activities" of Berlusconi and for the "personal and group financial advantage" of Cosa Nostra.The judges also said that the statute of limitations will most likely not be applied in Dell'Utri's upcoming appeals.
Posted by nickglais on 4/25/2012 03:05:00 AM