“Without a people’s army the people have nothing ” 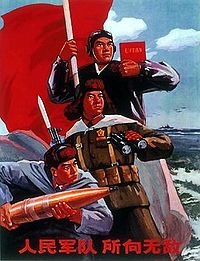 “Without a people’s army the people have nothing. ”(1) This is the conclusion drawn by Comrade Mao Tse-tung from the Chinese people’s experience in their long years of revolutionary struggle, experience that was bought in blood. This is a universal truth of Marxism-Leninism.

Build a People’s Army of a New Type

The special feature of the Chinese revolution was armed revolution against armed counter-revolution. The main form of struggle was war and the main form of organization was the army which was under the absolute leadership of the Chinese Communist Party, while all the other forms of organization and struggle led by our Party were co-ordinated, directly or indirectly, with the war.

During the First Revolutionary Civil War, many fine Party comrades took an active part in the armed revolutionary struggle. But our Party was then still in its infancy and did not have a clear understanding of this special feature of the Chinese revolution. It was only after the First Revolutionary Civil War, only after the Kuomintang had betrayed the revolution, massacred large numbers of Communists and destroyed all the revolutionary mass organizations, that our Party reached a clearer understanding of the supreme importance of organizing revolutionary armed forces and of studying the strategy and tactics of revolutionary war, and created the Workers’ and Peasants’ Red Army, the first people’s army under the leadership of the Communist Party of China.

During the Second Revolutionary Civil War, the Workers’ and Peasants’ Red Army created by Comrade Mao Tse-tung grew considerably and at one time reached a total of 300,000 men. But it later lost nine-tenths of its forces as a result of the wrong political and military lines followed by the “Left” opportunist leadership.

At the start of the War of Resistance Against Japan, the people’s army led by the Chinese Communist Party had only a little over 40,000 men. The Kuomintang reactionaries attempted to restrict, weaken and destroy this people’s army in every conceivable way. Comrade Mao Tse-tung pointed out that, in these circumstances, in order to sustain the War of Resistance and defeat the Japanese aggressors, it was imperative greatly to expand and consolidate the Eighth Route and New Fourth Armies and all the guerrilla units led by our Party. The whole Party should give close attention to war and study military affairs. Every Party member should be ready at all times to take up arms and go to the front.

Guided by the Party’s correct line of expanding the revolutionary armed forces, the Communist-led Eighth Route and New Fourth Armies and anti-Japanese guerrilla units promptly went to the forefront at the very beginning of the war. We spread the seeds of the people’s armed forces in the vast areas behind the enemy lines and kindled the flames of guerrilla warfare everywhere. Our people’s army steadily expanded in the struggle, so that by the end of the war it was already a million strong, and there was also a militia of over two million. That was why we were able to engage nearly two-thirds of the Japanese forces of aggression and 95 per cent of the puppet troops and to become the main force in the War of Resistance Against Japan. While resisting the Japanese invading forces, we repulsed three large-scale anti-Communist onslaughts launched by the Kuomintang reactionaries in 1939, 1941 and 1943, and smashed their countless “friction-mongering” activities.

Why were the Eighth Route and New Fourth Armies able to grow big and strong from being small and weak and to score such great victories in the War of Resistance Against Japan?

The fundamental reason was that the Eighth Route and New Fourth Armies were founded on Comrade Mao Tse-tung’s theory of army building. They were armies of a new type, a people’s army which whole-heartedly serves the interests of the people.

Guided by Comrade Mao Tse-tung’s theory on building a people’s army, our army was under the absolute leadership of the Chinese Communist Party and most loyally carried out the Party’s Marxist-Leninist line and policies. It had a high degree of conscious discipline and was heroically inspired to destroy all enemies and conquer all difficulties. Internally there was full unity between cadres and fighters, between those in higher and those in lower positions of responsibility, between the different departments and between the various fraternal army units. Externally, there was similarly full unity between the army and the people and between the army and the local government.

During the anti-Japanese war our army staunchly performed the three tasks set by Comrade Mao Tse-tung, namely, fighting, mass work, and production, and it was at the same time a fighting force, a political work force and a production corps. Everywhere it went, it did propaganda work among the masses, organized and armed them and helped them set up revolutionary political power. Our armymen strictly observed the Three Main Rules of Discipline and the Eight Points for Attention, (2) carried out campaigns to “support the government and cherish the people”, and did good deeds for the people everywhere. They also made use of every possibility to engage in production themselves so as to overcome economic difficulties, better their own livelihood and lighten the people’s burden. By their exemplary conduct they won the whole-hearted support of the masses, who affectionately called them “our own boys”.

Our army also pursued correct policies in winning over enemy officers and men in giving lenient treatment to prisoners of war. During the anti-Japanese war we not only brought about the revolt and surrender of large numbers of puppet troops, but succeeded in converting not a few Japanese prisoners, who had been badly poisoned by fascist ideology. After they were politically awakened, they organized themselves into anti-war organizations such as the League for the Liberation of the Japanese People, the Anti-War League of the Japanese in China and the League of Awakened Japanese, helped us to disintegrate the Japanese army and co-operated with us in opposing Japanese militarism. Comrade Sanzo Nosaka, the leader of the Japanese Communist Party, who was then in Yenan, gave us great help in this work.

The essence of Comrade Mao Tse-tung’s theory of army building is that in building a people’s army prominence must be given to politics, i.e., the army must first and foremost be built on a political basis. Politics is the commander, politics is the soul of everything. Political work is the lifeline of our army. True, a people’s army must pay attention to the constant improvement of its weapons and equipment and its military technique, but in its fighting it does not rely purely on weapons and technique, it relies mainly on politics, on the proletarian revolutionary consciousness and courage of the commanders and fighters, on the support and backing of the masses.

Owing to the application of Comrade Mao Tse-tung’s line on army building, there has prevailed in our army at all times a high level of proletarian political consciousness, an atmosphere of keenness to study the thought of Mao Tse-tung, an excellent morale, a solid unity and a deep hatred for the enemy, and thus a gigantic moral force has been brought into being. In battle it has feared neither hardships nor death, it has been able to charge or hold its ground as the conditions require. One man can play the role of several, dozens or even hundreds, and miracles can be performed.

All this makes the people’s army led by the Chinese Communist Party fundamentally different from any bourgeois army, and from all the armies of the old type which served the exploiting classes and were driven and utilized by a handful of people. The experience of the people’s war in China shows that a people’s army created in accordance with Comrade Mao Tse-tung’s theory of army building is incomparably strong and invincible.

2. The Three Main Rules of Discipline and the Eight Points for Attention were drawn up by Comrade Mao Tse-tung for the Chinese Workers’ and Peasants’ Red Army during the Agrarian Revolutionary War and were later adopted as rules of discipline by the Eighth Route Army and the New Fourth Army and the present People’s Liberation Army. As these rules varied slightly in content in the army units of different areas, the General Headquarters of the Chinese People’s Liberation Army in October 1947 issued a standard version as follows:

The Three Main Rules of Discipline:

(1) Obey orders in all your actions.

(2) Do not take a single needle or piece of thread from the masses.

(3) Turn in everything captured.

The Eight Points For Attention:

(3) Return everything you borrow.

(4) Pay for anything you damage.

(7) Do not take liberties with women.