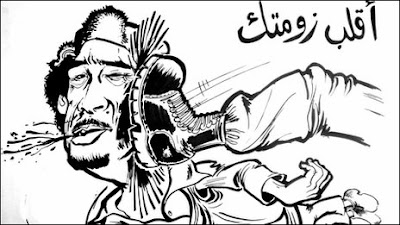 TRIPOLI (Reuters) - Poor neighbourhoods of the Libyan capital Tripoli openly defied Muammar Gaddafi on Saturday as his grip on power after 41 years of rule looked increasingly tenuous in the face of nationwide revolt.
Security forces had abandoned the working-class Tajoura district after five days of anti-government demonstrations, residents told foreign correspondents who visited the area.
The residents said troops opened fire on demonstrators who tried to march from Tajoura to central Green Square overnight, killing at least five people. The number could not be independently confirmed.
A funeral on Saturday morning for one of the victims turned into another show of defiance against Gaddafy.
"Everyone in Tajoura came out against the government. We saw them killing our people here and everywhere in Libya," a man who identified himself as Ali, aged 25, told Reuters.
"We will demonstrate again and again, today, tomorrow, the day after tomorrow until they change."
The scene in Tajoura contradicted statements by Gaddafy's son Saif al-Islam Gaddafi, who told reporters on Friday night that peace was returning to Libya.
Posted by nickglais on 2/26/2011 03:11:00 PM