Libya: Popular democratic uprising in favour of the West? 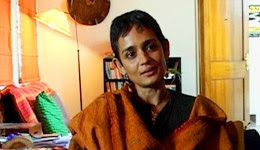 Picture Arundhati Roy
Willi Langthaler
Published:
Feb 25th 2011
Yes to people’s power in Benghazi, no to sanctions or military intervention
Arundhati Roy is an intellectual icon of the resistance against globalisation. Recently we asked her what she thinks about the democratic movements in the Arab world. Her answer was that the support those rebellions enjoy in the western media makes her rather anxious. How this fact can be interpreted?
The Egyptian movement was quite a challenge for the regimes of the west, as Mubarak was one of the most important pro-western dictators. His regime protected Israel and in return received billions of military aid each year. In the true spirit of neoliberalism, Washington also outsourced torture to Cairo. At the same time, the lords of the world have continued to as the keepers of the Holy Grail they call democracy.
The Tunisian movement was so powerful that it forced the US regime to back down from its support, while the former colonial power—France—still supported their torture interrogator Ben Ali.
In Libya on the other hand, the world seems to be alright again. The hacks are dancing again to the tune pattern employed against Saddam–Milošević–Ahmadinejad. It doesn’t help Qaddhafi that the west has been doing good business with him for many years, while he in turn keeps the African have-nots out of sight for the EU fortress and supports French colonial policy in Chad. For his people and for the Arab world, the ageing leader of the revolution has been continuing to mime the anti-imperialist, increasingly clownish and devoid of contents. On the other side of the Mediterranean, they are now propping up this faded anti-imperialist as an enemy for quasi-posthumous revenge against the old Qaddhafi.
The present bear hug is the worst burden to weigh down the democratic movement. If it wants to be democratic, it has to reject western support, otherwise Qaddhafi could regain legitimacy. Those who really want to support the popular movement have to resolutely oppose sanctions (let’s not forget the slow genocides in Iraq in the name of “democracy” and in Gaza right now); of course we also have to fight any military intervention.
However, support by the western media machinery won’t automatically create a pro-western movement. Of course there are forces in Libya—as well as in Egypt and in Tunisia—who seek salvation in the west, but the main forces of the rebellion are the middle and lower classes, and they combine democratic demands with social and anti-imperialist demands. This also seems to be the case in Libya, where the average standard of living is much higher than in other Maghreb countries, but just as in the oil monarchies of the Gulf, the oil rent is distributed in a very unequal way and political power is monopolised. The rebellion is thus absolutely legitimate, even though it is not motivated by hunger as it is in Egypt.
There is on the other hand a decisive difference. It seems that at least parts of the army stick to Qaddhafi. Without reliable information, we can only conjecture that this fact is due to a somewhat broader distribution of the oil income and to tribal loyalties that still have some importance in Libya. However, it is quite possible that the Libyan army will split and the conflict might lead to a civil war. An alternative power seems to take shape in and around Benghazi, the second-largest city of the country. In contrast to the neighbouring countries, that power is not based on a recycled military regime, but seems to be something radically new, and it is faced with the enormous problem that there is no organised and articulate opposition to fill the vacuum. There is a chance to experiment with people’s power, and we have to support that.
So far, only the media generals are talking about a military intervention. They would like to turn their keyboards and mice into cruise missiles of democracy. The capitalist oligarchy on the other hand will think very carefully which forces to support, before they take action. They’d rather see people’s power in Benghazi crushed in a bloody civil war.
The jubilations of the western media are very myopic and misplaced indeed, maybe delusional. They are hoping for a colour revolution like those staged in eastern Europe, but the Arab world has been the victim of 150 years of brutal colonialism and neo-colonialism, permanent Israeli aggression, numerous US-led wars, neoliberal pillage decorated with pro-western oil princes who flaunt a Disney Arabia to the starving masses. A few rabid liberal democracy criers won’t be enough to turn around the legitimate hatred of the masses against the west which has been nurtured for generations.
In the Middle East and in the Arab world, democracy means anti-imperialism. As soon as the dream of gentle regime change wears off and reality sets in, when the masses demand social justice and national sovereignty, which clash with western and Israeli interests, the party will be over in the starry-eyed liberal editorial offices. In a flash, the Arabs will be a primitive mass again who only deserve the stick, as they had until just a few weeks ago. It isn’t a coincidence that Israel is once more pointing out the direction: democracy is reserved for the white master race. The Israeli regime is beating its chest as “the only democracy in the Middle East”, and they are determined to keep things just like that.
The western bear hug of the democratic revolution is doomed to failure.