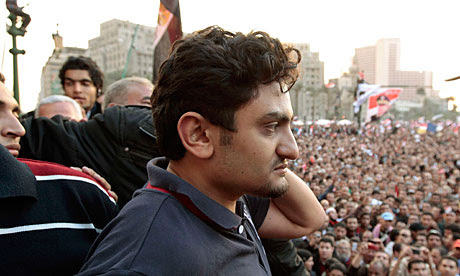 Wael Ghonim addresses crowds in Tahrir Square, Cairo. Illustration: Dylan Martinez/Reuters
Wael Ghonim, the Google executive who helped organise the protests that started Egypt's uprising, has been hailed as a hero and a symbol of hope amid calls for him to be appointed spokesman for the country's democracy movement.
Ghonim, a marketing manager and web activist who was lionised by demonstrators after he went missing on 27 January, confirmed in an emotional TV interview immediately after he was freed from detentionon Monday that he was behind a Facebook page that galvanised protests by angry youth.
Ghonim broke down and wept openly live on camera for Dream TV and his remarks were translated and quickly posted on Twitter to become what has been widely described as a rallying-point to keep the protests alive.
Ghonim declined to comment on his Twitter page, saying he did not give interviews to foreign media. But by early Tuesday evening, 148,700 people had signed up to a Facebook campaign calling for him to be appointed the official spokesman of several protestgroups.
"I am not a hero. I only used the keyboard, the real heroes are the ones on the ground, those I can't name," Ghonim said in the interview, which ended with him being overcome with emotion as he was shown images of some of those who died in the two-week uprising.
"Wael Ghonim is weeping for the martyrs of the Egyptian revolution," one fan posted on his Facebook wall. Another admirer wrote: "The whole of Egypt is with you. May God protect you." Meral Ezzeldien wrote: "Very soon our dreams will come true."
Ghonim got a thunderous welcome when he joined a massive demonstration in Tahrir Square on Tuesday, telling the crowd:

"We will not abandon our demand and that is the departure of the regime. My condolences to the fathers and mothers who lost sons and daughters who died for their dream."
Ahmad Mustafa, protesting in the square, described how he had been moved by Ghonim.

"I felt I could relate to him. He's the same age as me, he's pretty much the same background. I felt so connected to him, he portrayed me and the situation I'm in. Some of my friends who have not taken part in the demonstrations since they started are going to come today because of what they saw yesterday. It is has changed something in them. Sometimes you need some kind of spark to get you to go, and that's good."
Mostafa Hussein, a 30-year-old activist who joined the protests, said: "It was a very emotional interview, and I think it will prove to be a historical one as well."
Others agreed. "He's the most credible person in Egypt right now; he feels what we are all feeling," claimed Reem El-Komi, a 25-year-old protester. Her companion, Menna, agreed. "This is my first day at the protests - the moment I saw Ghonim on TV last night I knew I had to get down to Tahrir and stand with the Egyptian people," she said.
Another Twitter message read: "My aunt called me crying after Ghonim's interview saying 'I'm going to Tahrir tomorrow! God Bless him! He made us proud!' Twitter user Desert_Dals wrote: "Left breathless by Wael Ghonim. InshaAllah his sincerity & patriotism, beamed into Egypt's living rooms, will ignite this revolution #Jan25".
Ghonim's biography on his own Twitter account describes him as "Constantly Changing, Serious Joker, Internet Addict, Love challenging status quo!".
He confirmed that it was he who had set up the Faceboook page, We are all Khaled Said, named after the young Egyptian businessman whose death at the hands of police in June set off months of protests. The page became one of the main tools for organising the demonstrations that started the revolt in earnest.
"I was blindfolded for 12 days, I couldn't hear anything, I didn't know what was happening," he said in the interview, which has become a worldwide hit on the internet.
Neither Google nor his family had any clue where he was and feared for his life. In detention he was not informed of events outside and interrogated over what the authorities believed were foreign powers behind the Facebook campaign and protests. When the interviewer told him about some of the 300 people who had died while he was incarcerated, he cried. "We didn't do anything wrong. We did what our consciences dictated to us", he said.