The Poetry of Revolt by Elliott Colla 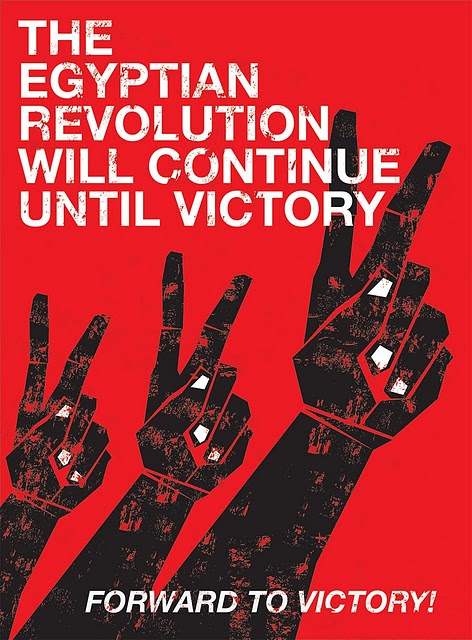 No less astonishing is the poetry of this moment. I don’t mean “poetry” as a metaphor, but the actual poetry that has played a prominent role in the outset of the events. The slogans the protesters are chanting are couplets—and they are as loud as they are sharp. The diwan of this revolt began to be written as soon as Ben Ali fled Tunis, in pithy lines like "Yâ Mubârak! Yâ Mubârak! Is-Sa‘ûdiyya fi-ntizârak!," ("Mubarak, O Mabarak, Saudi Arabia awaits!"). In the streets themselves, there are scores of other verses, ranging from the caustic "Shurtat Masr, yâ shurtat Masr, intû ba’aytû kilâb al-’asr" ("Egypt's Police, Egypt's Police, You've become nothing but Palace dogs"), to the defiant "Idrab idrab yâ Habîb, mahma tadrab mish hansîb!" (Hit us, beat us, O Habib [al-Adly, now-former Minister of the Interior], hit all you want—we're not going to leave!). This last couplet is particularly clever, since it plays on the old Egyptian colloquial saying, "Darb al-habib zayy akl al-zabib" (The beloved's fist is as sweet as raisins). This poetry is not an ornament to the uprising—it is its soundtrack and also composes a significant part of the action itself.

A History of Revolutions, a History of Poets
There is nothing unusual about poetry playing a galvanizing role in a revolutionary moment. And in this context, we might remind ourselves that making revolution is not something new for Egyptians—having had no less than three “official” revolutions in the modern era: the 1881 Urabi Revolution which overthrew a corrupt and comprador royalty; the 1919 Revolution, which nearly brought down British military rule; and the 1952 Revolution which inaugurated 60 years of military dictatorships under Nasser, Sadat and Mubarak. The first revolution succeeded in establishing the second parliamentary government on the African continent before it was crushed by foreign military intervention. In the aftermath of defeat, the British established a rapacious colonial rule over Egypt for more than 70 years. The second revolution was a sustained, popular uprising led by a range of pro-democracy activists from a range of civil institutions. Though savagely repressed, it did force the British to grant some concessions. The third revolution officially celebrated in Egypt stands apart from the first two in that it was a coup d’etat that went out of its way to circumscribe popular participation. In any case, it was accepted in the moment since it finally ended the rule of the royal family first overthrown in 1881 and initiated a process of British withdrawal from Egypt.
Besides these three state-commemorated events, Egyptians have revolted against the corruption, greed and cruelty of their rulers many more times in the last 60 years. On January 26, 1952, Egyptians emerged onto the streets to protest an array of issues—including the corruption of the monarchy, the decadence, power and privilege of foreign business elites, and the open-ended British occupation. The revolt was quickly suppressed, though the damage to property was massive, and it set in motion an exodus of foreign elites—and the military coup months later. In 1968, Egyptian students launched huge and daring protests against the repressive policies of Nasser’s police state. In the early 1970s, Egyptian students engaged in sustained mass protests against the radical political reorientations of the new Sadat regime—and eventually forced the state to re-engage in military confrontation with Israel.