Pambazuka - Would Africa miss Gaddafi if he went? 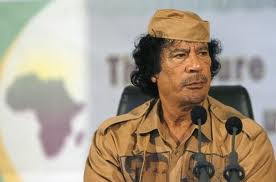 For full article visit :
Pambazuka - Would Africa miss Gaddafi if he went?

“Their main concern is the rough treatment – often amounting to brutality – meted to Africans who have tried to live and work in Libya. No-one denies the fact that Libya has the right to expect Africans to obtain visas before travelling to Libya, or that they should obtain work permits before working in Libya, and that once there, they should act lawfully.

But as this report in the Ghana Daily Graphic of 17 December 2004, shows, the methods adopted by the Libyan authorities in dealing with the citizens of other African states who fall short of the behaviour expected of them while they are on Libyan territory, is often deplorable:

‘The Libyan Government has deported another batch of 132 Ghanaians living in that country.

‘This brings to 6,027, the total number of such deportees since the Libyan Government began the exercise… The deportees had been coming in on regular intervals of between two weeks and one month. They were brought in “aboard a cargo flight”.

‘Airport sources said that “apart from the first batch, which was brought in aboard a passenger plane, the rest had always been on cargo planes which had no seats… In an interview, some of the deportees alleged that the conditions at the camp had been dehumanising, since there were no sleeping places. ‘’There were only canopies stretched across a vast area of land and we were not fed regularly. We had to stay without water for over a day or two,” the deportees said, adding that there was overcrowding at the camp… “The source said that a particular batch had been kept at the camp for 17 days and so they were very exhausted.”’

Now, which Ghanaian patriot does Gaddafi think can condone such ‘dehumanising treatment” by a country that purports to have the interests of other African states so much at heart that it wants to unite with them? Only those who benefit from Libyan petrodollars can close their eyes to such inhumanity”.

“The latest news from Tripoli – that Gaddafi is using African mercenaries recruited from Chad, Darfur, Niger, Burkina Faso and other black African countries – to kill Gaddafi’s Libyan opponents in Tripoli and other cities – will, of course, constitute the death-knell of any pretence he ever had of leading Africa into unity. Indeed, he is contributing enormously towards the entrenchment of racial hatred between Africans ands Arabs”.
Posted by nickglais on 2/28/2011 11:58:00 AM