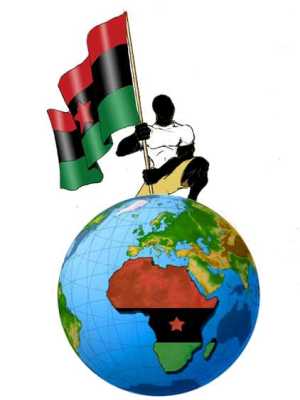 Logo of African Socialist International
Publishing this Article by Democracy and Class Struggle does not imply endorsement. We publish this article to focus on the African dimension of the North African and Middle East Uprisings.


All over Africa, the dramatic events in Tunisia and Egypt are followed, with opposition groups and dissidents hoping the same could happen in their country. Mostly, these are only dreams, but some could come true.

The first sub-Saharan copycat of the North African wave of revolution has already had his try. Gabon's opposition leader André Mba Obame in January tried to stage a revolution inspired by Tunisia by declaring he had indeed won the August 2009 (!) presidential election in the country.

After a swearing-in ceremony, broadcasted by a private TV channel owned by himself, self-declared "President" Obame called for mass demonstrations to force President Ali Bongo out of office. Gabonese police forces had a relatively easy job dispersing the hundreds of protesters supporting Mr Obame.

It is noteworthy that the most widespread talk of Tunisia-like revolutions in African countries is registered in the Central African region and in the Horn of Africa. But the differences are great, with the Diaspora shouting loudest for revolution on the Horn and the local opposition being most active in Central Africa.

The sociology of fear
Among analysts, these differences are put in connection with the sociology of fear. In Tunisia and Egypt, the discontent populace was gripped with fear for decades, but as the fear let loose, there was nothing stopping them from pouring into the streets and demand regime change.

A parallel to this happened in Ethiopia in 2005, when hundreds of thousands suddenly dared to protest the probable fixed vote that kept Prime Minister Meles Zenawi in power. The opposition's surprisingly good election results - widely interpreted as a popular majority for the opposition - removed popular fear of the regime and allowed for ample protests.

But PM Zenawi stroke back. The 2005 demonstrations were brutally subdued, repression became tougher all over the country and any real opposition was suppressed. The Ethiopian government managed to reinstall the agenda of public fear, however sweetening it with massive economic and social gains.

Meanwhile, the Ethiopian Diaspora is among the most radical of African diasporas calling for revolution in their homeland. They loudly urge for an Egyptian-style revolt in Ethiopia. But they are not likely to succeed, as the environment of fear is rather increasing than decreasing in their homeland.

In neighbouring Sudan, with strong cultural and historic ties to Egypt, hundreds of dissatisfied youths in Khartoum for two weeks tried to build momentum for their protest movement, with every manifestation so far being brutally subdued by riot police forces. But the crowds participating in the protests keep being far below a threshold that could spark wider public protest.

Also in (northern) Sudan, fear is ruling. But in addition to the fear for the regime's repressive forces, there is also a fear of the mainly Arab population of Khartoum that the chaos provoked by a revolt could end their relatively privileged position in Sudan. A popular revolt would have a bad timing, as South Sudan is already lost to secession and Darfur and other non-Arab regions could use the situation to follow on the same path.

The dynamics of elections


In other countries, it seems to be the holding of elections that could spark Egypt-like revolts, with campaigns being seldom occasions of public debate and reducing fear. But the dynamics of an election are also completely different than those of a leaderless popular uprising: Opposition leaders organising protests can be arrested.

In Uganda, historic opposition leader Kizza Besigye is making direct references to the Egyptian revolt in his ongoing presidential elections campaign, claiming conditions in Uganda "are the same."

Mr Besigye, with some credibility, claims that Uganda's President Yoweri Museveni has a tradition of manipulating elections. He warns that, if the poll results later this month again are manipulated, an Egypt-like protest wave will shake Uganda, adding that the opposition has a lead on President Museveni.

The Ugandan opposition leader's methods are questionable, as there is no proof the opposition indeed is more popular than the President's party. It is also questionable whether a possible mass protest over a "stolen vote" could follow an Egyptian model because it would split the Ugandan populace in two rival camps. Arresting the opposition leadership would be an easy task, but preventing widespread violence - somewhat along ethnic lines - would be more difficult.

In Djibouti, on the other hand, conditions for a popular uprising in connection with the upcoming elections are better. With an ethnically uniform population, recent price rises for basic food staples and the main opposition boycotting the elections for the third time in a row, calls for protests against long-time President Ismail Omar Guelleh would be more credible.

There have already been small beginnings of a protest movement in Djibouti, where the grip of fear is less than in most African Horn countries. Earlier this month, some 300 protesters called for President Guelleh to step down. Yesterday, student protests at the University of Djibouti went violent. Potential protesters now wait for the opposition to declare its support or not for a massive revolt.


Djibouti however is very different from most African countries due to its ethnically uniform population. Elsewhere, ethnicity spills into politics, with one ethnic group mostly willing to defend the President. This could become the case in Uganda. Opposition and Diaspora calls for Egypt-like revolts in Zimbabwe, Côte d'Ivoire, Ethiopia, Nigeria and Chad meet the same challenge.

But the Central Africa region nevertheless seems ripe for revolt. In Chad, calls for an uprising interestingly are removed from the ethnic lines dividing Chadians, rather pronounced as an anti-globalisation, anti-capitalism and anti-corruption movement. The groups calling for a socialist revolution in Chad however are marginal.

In the Central African Republic, where President François Bozizé this month claims re-election, the political opposition is uniting and trying to mobilise the population against the regime. So far, they are having little success.

The country in the region with the greatest potential of an uprising is Cameroon, where President Paul Biya has been in power since 1982. Cameroon is so ethnically diverse that the ethnic factor is losing its importance. Tension is set to build up prior to the presidential elections planned for October this year, especially if President Biya - as expected - decides to run for a new seven-year term.

In Cameroon, the constitutional two-term limit on the presidential office was removed through a parliamentary vote in 2008. Only a year before, President Biya had promised he was into his last term. An announcement of the President to run once again is destined to spark opposition protests, which again could lead to popular protests as discontent is ample in Cameroon.

Apart from the African Horn and Central Africa, there are few signs of Egypt-style popular unrest. In Southern Africa, the political and popular struggle in Zimbabwe and Swaziland has other roots. In South Africa, President Jacob Zuma wisely has urged the country's youth to tell him their grievances via Facebook and Twitter, letting them know the President is on their side.

The calmest region is West Africa, with the exception of the older conflict in Côte d'Ivoire. Here, democracy is finally taking root in most countries, and a new-found popular perception that people can change government through elections seems to be an effective vaccine against the large potential of socio-economically based revolts.

In Africa's most repressive regimes - Eritrea, The Gambia and Equatorial Guinea - there are close to no signs of a popular uprising. Here, access to information is severely limited and the grip of fear on the population is so strong that no one even considers organising a protest march.