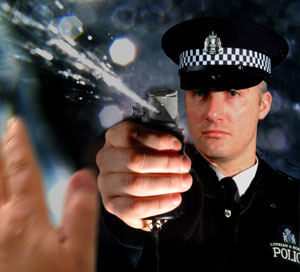 Tax avoidance protesters needed hospital treatment today after police used CS spray to break up a demonstration on Oxford Street in central London.
Hundreds of people staged peaceful sit-ins at high street stores around the country as part of the latest UK Uncut day of action, designed to highlight companies it says are avoiding millions of pounds in tax.
In London protesters had successfully closed down Boots in Oxford Street – one of the companies campaigners accuse of tax avoidance – when police tried to arrest a woman for pushing a leaflet through the store's doors. Other demonstrators tried to stop the arrest and at least one police officer used CS spray, which hospitalised three people.
Jed Weightman, one of those who went to hospital, said protesters had joined hands to try and prevent the arrest.
"One police officer sprayed towards us and because I was tall I got a lot of it in my face," he said. "My eyes were streaming and I couldn't see anything."
Earlier this week Sir Hugh Orde, president of the Association of Chief Police Officers, said police could adopt more extreme tactics to counter the growing wave of protests, and hinted that UK Uncut demonstrators could face criminal and civil charges if they invaded shops during today's protests.
Activists reacted angrily to yesterday's events, claiming the police had been "heavy handed and disproportionate."
Anna Williams, who saw the incident, said: "This is yet another example of political policing that is about protecting corporate interests and not those of ordinary people ... We have a right to protest when the government are making unnecessary cuts that will hit the poorest in our society the hardest."
Protesters said staff at Boots had been shocked by the police tactics, and took those who were suffering from the effects of CS spray into the store and offered them free eye wash.
"The staff at Boots were fantastic and took us inside and gave us free treatment," said Gordon Maloney, 20, one of the other protesters who was hit by the CS spray. "My eyes were really streaming and my face hurt but I was most struck by the violence used by the police. I have been on a lot of demonstrations and have not seen anything like this before."
A spokesman for the Metropolitan police said officers had arrested a woman for damaging the door of Boots and confirmed CS spray had been used. He said he was unaware of anyone needing hospital treatment.
The London demonstration was one of around 30 taking place aroundthe UK today as part of a wider campaign against corporate tax avoidance and the government's cuts.
Using the Twitter hashtag #ukuncut, the fast-expanding group has become a rallying point for protesters and past campaigns have closed down scores of high street stores accused of avoiding tax.
At today's London demonstration protesters dressed in surgical masks and bloody bandages claimed Boots was avoiding huge sums of money by being registered in Switzerland, where taxes are far lower.
A Boots spokeswoman said it had registered in Switzerland because "in the longer term we believe it will better reflect the increasingly international nature of our wider group".
"If we had registered in Switzerland purely for tax reasons there are many other countries that we could have considered."
She added that the company had contributed to the UK's finances through increased business rates and national insurance contributions resulting from the expansion of the brand.
Source : Guardian
Posted by nickglais on 1/30/2011 01:23:00 PM