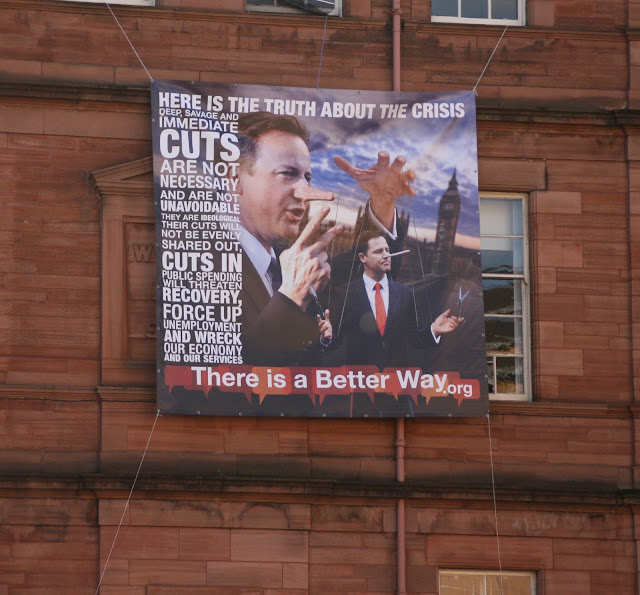 4
The Government has been keen to claim that the cuts will be “fair” and even “progressive”. It has promised that it “will introduce arrangements that will protect those on low incomes from the effect of ... spending constraints22.” The problem with this claim is that it is people in poverty who are much more likely to be users of the services that will be cut or downgraded.
For example, many services only exist because they help people cope with the effects of poverty and deprivation. And many services are used much more by the less well-off – public transport, for instance, is used by lower income groups as they are less likely to have a car23.


Politicians do not like to admit it but it is important to remember that Britain has an unusually large number of people living in poverty or on very low wages for an advanced European economy. It has also become a very unequal economy over the last thirty years. Because of this, according to TUC analysis of official data, the amount of money spent by the Government on individuals and their families through benefits and public services accounts for the majority of the income of the less well-off half of the population, if those services are treated in cash terms. This means anyone earning around £20,000 or below is likely to face a significant blow to their incomes and to the services they use as a result of the cuts.
In addition, a recent study by the independent Institute of Fiscal Studies of the cuts to welfare payments and tax credits concluded that:


“the tax and benefit changes announced in the emergency Budget are clearly regressive as, on average, they hit the poorest households more than those in the upper-middle of the income distribution in cash, let alone percentage, terms.”24
The cuts will also hit some regions much harder than others and these will tend to be regions with concentrations of less well-off people. This is because these areas tend to rely on public services more heavily but also rely on the public sector more for jobs. Areas such as the North East, Wales and Northern Ireland will be particularly badly hit.
Conservative politicians have argued that these areas have become over-reliant on the public sector for support and jobs and must be weaned off. This overlooks the fact that the reason these areas are now so reliant on the public sector is because the thriving manufacturing companies that once dominated their economies were destroyed by the 1980s recession and cuts and have never been replaced by any other business activity or investment of a similar scale. The idea that massive cuts in the public sector will magically lead to new jobs being created in the private sector is absurd at any time but is particularly absurd at a time of recession or very low growth.
Many charities rely on public money to function. Funding from central and local government now accounts for 36 per cent of charities’ income. As a result public sector cuts could hurt thousands of good causes that are household names. This would have tremendous implications for people who use these organisations’ services, as there is already evidence that demand for these services has been growing very fast during the recession. Last year a survey of charities found that 36 per cent expected to see higher demand for their services even while 20 per cent expected to have to cut their services25.

So even though the Government is very keen to present its cuts as fair, it is inevitable that the planned cuts will impact on the poorest and most vulnerable the hardest.
Case study: cuts in the UK in the 1980s
The idea that spending cuts will hit the most vulnerable is not just guess-work. We know this will happen because it is precisely what happened in the 1980s. The deep cuts introduced by Margaret Thatcher made the British economy far less equal and forced millions into poverty.


During the 1980s the number of children living in poverty rose from one and a half million to three million26 and 100,000 more families were homeless at the end of the 1980s than at the beginning27. And in 1976 death from adult diseases was 80 per cent higher for men in the lowest social class than those in the highest social class but this rose to a 128 per cent difference by 1989.


27 Walker and Walker (eds) (1997) Britain Divided: The Growth of Social Exclusion in the 1980s and 1990s London: Child Poverty Action Group p141.
22 The Coalition: our programme for government, HMG, 2010, p 15 http://www.direct.gov.uk/prod_consum_dg/groups/dg_digitalassets/@dg/@en/documents/dig italasset/dg_187876.pdf 23 Around half of households in the poorest fifth of the income distribution do not have a car, compared to roughly one in ten in the richest half. Monitoring poverty and social exclusion 2009, JRF, 2009, p 102 http://www.jrf.org.uk/sites/files/jrf/monitoring-poverty-social-%20exclusion-2009-full.pdf