Muammar Gaddafi has condemned the uprising in Tunisia 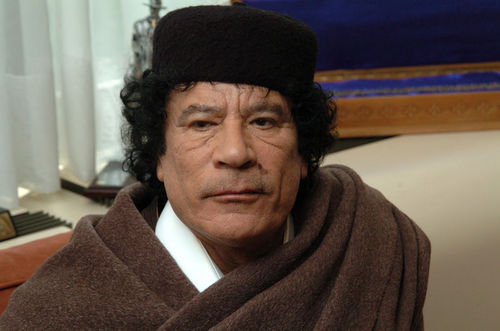 The Libyan leader, Muammar Gaddafi, has condemned the uprising in neighbouring Tunisia amid reports today of unrest on the streets of Libya.
In a speech last night Gaddafi, an ally of the ousted president, Zine al-Abidine Ben Ali, said he was "pained" by the fall of the Tunisian government. He claimed protesters had been led astray by WikiLeaks disclosures detailing the corruption in Ben Ali's family and his repressive regime.
The leaked cables were written by "ambassadors in order to create chaos", Deutsche Press-Agentur reported Gaddafi as saying.
His remarks came as Tunisian politicians hold talks to form a unity government to help maintain a fragile calm two days after violent protests forced Ben Ali from office.
Tanks were stationed around the capital, Tunis, and soldiers were guarding public buildings, but after a day of drive-by shootings and jailbreaks in which dozens of inmates were killed, residents said they were starting to feel more secure.
"Last night we surrounded our neighbourhood with roadblocks and had teams checking cars. Now we are in the process of lifting the roadblocks and getting life back to normal," said Imed, a resident of the city's Intilaka suburb.
Gaddafi's comments reflect a nervousness among other long-serving Arab leaders that the uprising in Tunisia will embolden anti-government protests elsewhere in the region.
There were reports today, backed up by video evidence, of protests in the Libyan city of al-Bayda, according to the Guardian's Middle Eastspecialist Brian Whitaker, writing on his blog al-bab.com. Protesters clashed with police and attacked government offices, in a demonstration about housing conditions, according to an opposition website.
Whitaker writes: "We can expect to see many more incidents like this over the coming months in various Arab countries. Inspired by the Tunisian uprising, people are going to be more assertive about their grievances and start probing, to see how far they can push the authorities. In the light of Tunisia we can also expect a tendency, each time disturbances happen, to suggest (or hope) that they are the start of some new Arab revolution. The reality, though, is that almost all of them will quickly fizzle out or get crushed."
In Egypt, a human rights activist, Hossam Bahgat, said the protests in Tunisia had encouraged those opposed to the regime of the long-time Egyptian president, Hosni Mubarak. "I feel like we are a giant step closer to our own liberation," he said. "What's significant about Tunisia is that literally days ago the regime seemed unshakable, and then eventually democracy prevailed without a single western state lifting a finger."
Writing on Twitter, the Egyptian opposition leader and former chief UN weapons inspector, Mohamed ElBaradei said: "Violence in Tunisia now is a product of decades of repression. Regime in Egypt must understand that peaceful change is only way out."
In his statement, broadcast last night on Libyan TV, Gaddafi said: "Tunisia now lives in fear. Families could be raided and slaughtered in their bedrooms and the citizens in the street killed as if it was the Bolshevik or the American revolution."
In attempt to placate protesters Ben Ali had pledged to stand down in 2014 before he decided to flee to Saudi Arabia.
"What is this for? To change Zine al-Abidine? Hasn't he told you he would step down after three years? Be patient for three years and your son stays alive," Gaddafi said.
Gaddafi, who has been Libyan leader since 1969, urged Tunisia to adopt Libyan model of government. He said this model "marks the final destination for the peoples' quest for democracy. If this is what the events [in Tunisia] are for, then it has to be made clear".
Source: Guardian Newspaper UK
Posted by nickglais on 1/16/2011 05:19:00 PM