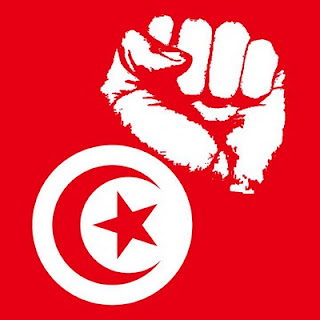 The following statement is posted for the information of our readers. It is not posted as an endorsement of any particular program wthin the Tunisian movement, which still deserves much more study.

As an affirmation to our involvement in the revolution of our people who are struggling for their right to dignity and freedom, whom their sacrifices resulted in dozens of martyrs and thousands of injured and detainees, and in order to complete the victory against the internal and external enemies, and in response to the ongoing attempts for plundering the people’s sacrifices, 14th January Front is formed as a political frame working on advancing our people’s revolution towards achieving its goals and to confront the anti-revolution forces. It includes the founding forces of political parties and progressive and democratic organizations.

The Front’s urgent tasks are:

Bringing down Ghannouchi current government or any government that includes symbols of the former regime.

Dissolving the RCD, the confiscation of its headquarters and property and Bank accounts as they belong to the people, and dismissing its members.

Formation of temporary force that enjoys the confidence of the people and the progressive forces of the civil society political, associations, unions and youth organizations.

The dissolving of the House of Representatives and the advisers council and all current false bodies, and the Higher Council of the Judiciary, and the dismantling of the political structure of the former regime, and to prepare for elections of a constituent assembly within a period that does not exceed one year, for the formulation of a new democratic constitution and a new legal system that will govern public life ensuring political and economic and cultural rights of people .

Dissolution of the political security and enact new security policy based at respect for human rights and the law.

Trial of all those who has been proven to loot the people's money and/or commit crimes such as repression, imprisonment, torture and killings, whether by decision making, ordering or/and execution. Trial also of all of those proven to have taken bribes and misconduct of public property.

Confiscating the property of the former ruling family and those close to them and their associates and all officials who took advantage of their position to gain wealth at the expense of the people.

Providing jobs to the unemployed and taking urgent measures for their benefit such as issuing unemployment benefit system and social and medical security and improving the purchasing power of the daily-wage workers.

Building a national economy which services the people by putting the vital and strategic sectors under state control and nationalising the companies that were privatised and drafting an economic and social policy that breaks-up with liberal capitalist approach.

Guaranteeing public and individual liberties and primarily the freedom of demonstration and organisation, the freedom of expression and the press and the freedom of belief and the release of all those under arrest and declaring a general amnesty.

The Front salutes the support of the masses and the progressive forces in the Arab world and the world for the revolution in Tunisia and calls upon them to continue their support with whatever means possible.

Opposing normalisation with the Zionist state and criminalising it and supporting all the national liberation movements in the Arab world and worldwide.

The Front calls upon the masses and the progressive and democratic forces to continue their mobilisation and their struggle using all legitimate forms especially street protest until their objectives are achieved.

The Front salutes all the committees, the organisations and the forms of self-organisation of the masses and calls for the broadening of their actions in public life and the running of all aspects of the daily life.

Glory to all the martyrs of the uprising and victory the masses in revolt.


The League of Left Workers

Congratulations to the people and workers of Tunisia, North Africa for overthrowing a despotic regime.

We support the revolutionary struggles of all peoples seeking to get rid of corrupt governments and feudal regimes.

In the heart of the British imperialist dictatorship, we are not yet strong enough to confront the state apparatus and the Crown.

But our rotten system will have to be overthrown in order to obtain working class , socialist state power.