War is being thrust upon us, Bhattarai says 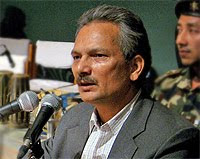 UCPN (Maoist) vice-chairman Dr .Baburam Bhattarai has accused the government of seeking to compel the Maoists to return to war by opening fire at unarmed landless squatters in Kailali district on Saturday, killing four.

Speaking at a program in the capital Monday, he also accused the parliamentary parties of engaging in efforts to aggravate the situation and turn the country into conflict zone.

“National and international powers are conspiring to turn Nepal into another Afghanistan,” Dr Bhattarai said, adding that the Maoists are committed to the ongoing peace process and won’t let country turn into a battle ground
Posted by nickglais on 12/08/2009 11:54:00 AM