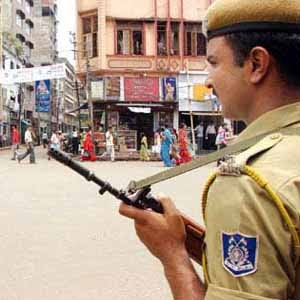 New Delhi (IANS)- Central paramilitary forces have taken up positions to begin the offensive against Maoist guerrillas in Maharashtra and Chhattisgarh in the first half of December, senior officers here say.

The schedule has been worked out, forces have been deployed and, if everything goes well, the first phase of the operations could take off as early as next fortnight.

‘The battalions of the Border Security Force (BSF), the Indo-Tibetan Border Police (ITBP) and the Central Reserve Police Force (CRPF) had already taken their positions in Maharashtra and Chhattisgarh, from where we would first start the operations,’ a senior officer dealing with anti-Maoist operations told IANS on condition of strict anonymity. The BSF, ITBP and CRPF would be jointly operating in Chhattisgarh, he added.Four battalions from the ITBP and at least two from BSF have moved to Chhattisgarh. Each battalion comprises 700 personnel. The CRPF is present in large numbers in Chhattisgarh, the most affected by Maoist violence.

‘In Maharashtra the onus of taking on the Maoists largely lies on the shoulders of the CRPF. The force has moved additional three battalions in the state,’ the officer added.

The CRPF, one the world’s largest paramilitary forces, has 207 battalions.

Another senior officer, who was not authorised to speak to media, said: ‘The operations will be jointly launched in synergy in both the states. It will be coordinated and additional forces would be rushed as per the requirement.’

Asked about the launch of offensive operations, the officer said: ‘It will not be launched nationwide. In first half of December we would be covering Maharashtra and Chhattisgarh.’

‘After the setting up of a government in Jharkhand, which is presently undergoing elections, we will take up operations there,’ he said, adding that no timeline had been set for commencing operations in the state.

And, once the election process is complete in Jharkhand, the BSF and CRPF battalions which are presently posted there will undergo specific training related to anti-Maoist operations and will be deployed in Orissa.

‘Once they are trained, we would be deploying them in Orissa for the offensive against the Maoists. All the operations would be in phases and one after the other. The plan is to capture and control Maoist controlled areas in the affected states one by one,’ the official added.

Senior officials confided to IANS that it will not be before March when the security forces will launch their operations in all the Maoist-affected states.

According to rough estimations, over 60,000 security personnel from the central paramilitary forces would be in acction against 6,000-7,000 armed Maoist cadres. Officials say the Maoists are armed with heavy as well sophisticated weapons like light machine guns, AK-47s, AK-56s and Insas rifles.
Posted by nickglais on 12/03/2009 11:44:00 AM