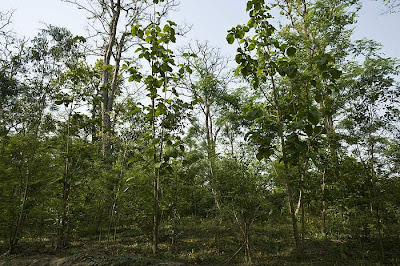 In the last five days, around 10,000 people led by UCPN (Maoist)-aligned organisations representing the landless have thronged Dudejhari forest of Baliya village development committee in Kailali district for capturing public land and forest, according to officials.

The Maoists have assured these squatters that they would be provided free land in Kailali district.

Some 10 kilometres forest land has already been occupied by the Maoists. The squatteres have set up hundreds of huts and temporary shelters to capture the forest area, The Kathmandu Post quoted officials as saying.

They have also warned to retaliate if any one tries to evict them. Hundreds of people including women and children have formed human barricade encircling the encroached area with the aim of retaliation in case of their removal.
Posted by nickglais on 12/01/2009 01:15:00 PM