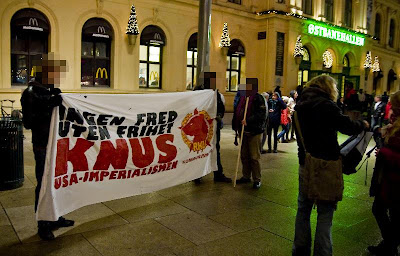 Members of Serve the People and the Revolutionary Communist Youth of Norway protest the Nobel Peace prize award to Barack Obama in Oslo.

The award to Obama exposes the Imperialist doublespeak of talking Peace but waging War in Iraq and Afghanistan.

Congratulations from Democracy and Class Struggle to our Norwegian comrades for participating in the demonstration in Oslo.

Demonstration against Obama in Oslo

Serve the People – Communist League of Norway and their youth organisation Revolutionary Communist Youth participated in yesterday's demonstration in Oslo against the awarding of the peace prize to US President Barack Obama.


We did not formally sign up for the demonstration since we evaluated the slogans as too passive and since we did not approve to the use of English slogans in a demonstration in Norway. We interpreted this as the wish of the organisers to «reach to» Obama.

But there was a freedom to join up with your own slogans, so we participated under the slogan «No peace without freedom – SMASH US IMPERIALISM» («Ingen fred uten frihet – KNUS USA-IMPERIALISMEN») and were spreading leaflets saying that the election of Obama doesn't change the nature of US foreign policy. These leaflets were almost torn out of our hands and showed to be popular, especially among people with immigrant background.. A good number of people also wanted further talks with us in order to organise themselves..

The total number of participants was approximately 1800.