2010 will be bloodier if govt launches offensive: Maoist leader Kishanji 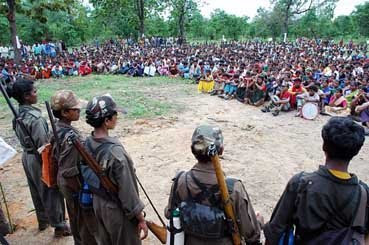 Posted by Rajeesh on Indian Vanguard on December 22, 2009

New Delhi, Dec 22 (IANS): If 2009 was bad, 2010 would be ”bloodier” if the government goes ahead with its planned offensive against the Maoist jungle bases, a top guerrilla leader has vowed while warning of more retaliatory violence in the months to come.

“Home Minister P. Chidambaram is a liar. At one level he says the offensive is a media creation but at the same time he is pumping in more troops in Jharkhand and Chhattisgarh. I understand there is going to be a major crackdown in March,” said Koteshwar Rao alias Kishanji, a politburo member of the Communist Party of India-Maoist (CPI-Maoist), which does not believe in parliamentary democracy and swears by the barrel of the gun.

“If they (security forces) begin their operations, I promise you 2010 will get bloodier. There will be no respite from violence,” Kishanji, in charge of operations in eastern India, said in a telephonic interview from an undisclosed location in West Bengal.

Till Nov 15 this year, over 770 civilians and security personnel were killed in Maoist violence, the largest number of casualties in four years. In Jharkhand alone – one of the worst affected states – there have been 1,885 incidents of violence since 2006.

Kishanji, 52, operates from the interiors of Lalgarh in West Bengal and is one of those fine-tuning the strategy of the Maoists. It was after considerable effort that IANS managed to track him down on one of the several mobile phones he uses through a chain of contacts. Reputed to be a military strategist and an advocate of tough tactics, Kishanji is said to be the mastermind behind recent killings of Communist Party of India-Marxist (CPI-M) members in Lalgarh, West Bengal.

In his view, Operation Green Hunt, as the proposed offensive he says is labelled, will “backfire”. “This so-called assault against us will backfire. All this talk of war against its own people is humbug and carries no conviction,” said Kishanji, originally a resident of Andhra Pradesh. He is wanted in Orissa, Bihar, Jharkhand, West Bengal and Andhra Pradesh for waging war against the state.

He had initially joined the movement for a separate Telangana state and then became a full-time member of the Maoist outfit way back in 1971.Kishanji, said to be responsible for the abduction of West Bengal policeman Atindranath Dutta and his subsequent release in October, said the Maoist leadership had changed its strategy after some top-rung leaders were arrested.

“We have learnt our lessons. Our tactics have changed and we won’t make similar mistakes again,” he said, speaking both in English and Hindi.In the last few months, police and security personnel have arrested several Maoist leaders, including Kobad Ghandy from an undisclosed place in Delhi, Chhatradhar Mahato from West Bengal and a couple, Ravi Sarma and B. Anuradha, who were nabbed in Jharkhand.

The arrests have come as Chidambaram has been stressing that civil society must stop romanticising the rebels and instead judge them in the context of the “mountain of violence”.Kishanji also lashed out at Prime Minister Manmohan Singh’s lament that there had been a systemic failure in giving the tribals a stake in the economic processes and how authorities should change ways in dealing with them.

“Does he (Manmohan Singh) know what’s happening on the ground? State governments go around signing agreements for special economic zones and setting up more sponge iron factories at the cost of the tribals. Where is the healing touch? They are all hypocritical.” However, Kishanji did hold hope that there could be room for talks with the authorities.

“We can talk, if there is ceasefire and if there is a withdrawal of forces. But it has to be genuine. Otherwise it has no meaning at all.” Kishanji refused to comment on reports that a section of Maoists disapproved of methods of “indiscriminate killing” unleashed by him. Media reports have quoted unnamed rebels in the outfit’s state unit questioning Kishanji’s way of dealing with CPI-M sympathisers. “If that was true, then I would not be here. My ways are transparent and there for everyone to see,” he said, refusing to be drawn further into the debate