After lift of ban on Maoist ‘mouthpiece’, editor, publisher held, in jail 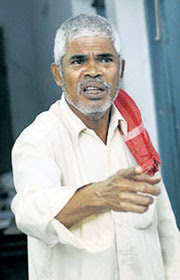 Kolkata : The ban on the People’s March — a mouthpiece of the Maoists — was lifted by the Press & Registration Appellate Board (PRAB) over three months ago. But two persons arrested in Kolkata have been in jail since owing to their association with the publication.

The state police officers plead ignorance about the lifting of the ban.

Swapan Dasgupta, editor of Bengali version of People’s March and Sadananda Singha, its publisher, were picked up from their homes in Garia by the Special Branch of Kolkata Police on October 7. The press in Maniktala Industrial Area was raided and all documents and equipment were seized.

They were charged under the Unlawful Activities Prevention Act (UAPA) for publishing a banned periodical that allegedly contained “seditious matter”, even though the ban had been lifted. And they were remanded in judicial custody.

A senior officer of Kerala Police said: “The People’s March was proscribed in February 2008 after the Ernakulam District Collector banned it on January 15 on the ground that it indulged in publishing seditious matters, exhorting the public to take up arms for violent struggle and promoting divisive tendencies in the country.”

But a ruling of the PRAB on August 7 this year set aside the Collector’s order and held that “the magazine regains its force and becomes operative with immediate effect.”

The Board, comprising Chairman Justice K N Ray and member Ramesh Gupta, said as per Section 8(b) of the Press and Registration of Books Act, no publication could be banned on these grounds. The ruling stated: “Seditious offences may be taken cognizance of under the IPC or other relevant laws.”

Jacob Punnoose, Director General of Police, Kerala, said: “In December 2007, we arrested P Govindan Kutty, the editor, publisher and printer of the periodical.” Later, the state government decided to ban the publication after issuing an order. However, the PRAB has quashed the order. “But I cannot comment on why the ban was lifted by the PRAB,” he added.

Kutty, the 63-year-old editor, had appealed to the Board against the ban, and in August, after nine months, it allowed the publication to restart.

“The PRAB has allowed me to come out with the magazine once again, the first issue has been published in November,” Kutty said on phone from Ernakulam, Kerala. The issue has an interview of Central Committee member of the CPI(Maoists), Ganapathi as its lead article.

“The West Bengal Government has taken a step worse than the Kerala government,” he said. “I was arrested by the Kerala Police and subsequently my magazine was banned.” But Swapan Dasgupta was arrested for publishing a banned magazine at a time when the ban had already been lifted, Kutty said. Dasgupta was slapped with a case under UAPA. “But where does the case stand if the ban does not exist? I have decided to appeal to the court for the release of two innocent persons.”

The DGP, Bhupindar Singh, said: “Dasgupta and Singha were arrested for publishing a banned magazine which is the mouthpiece of the Maoists. We are yet to receive any written order saying the ban has been lifted.”

Ashok Bakshi, a senior Public Prosecutor of the state, however, said: “If the ban on the magazine does not exist then legally they should be released. But the case is pending in Sealdah court.”
Posted by nickglais on 12/16/2009 01:01:00 PM