The oppressed use violence only as a last option: Vernon Gonsalves 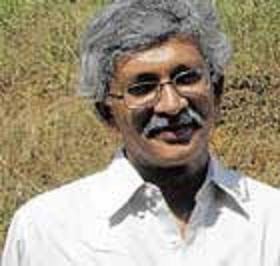 Posted by Rajeesh on Indian Vanguard on December 7, 2009

He spent over 10 years in ‘union politics’ organising labour in the harsh environs of rural Maharashtra. In August 2007 he was arrested by the Anti-Terrorism Squad in Mumbai and charged with planning a naxal attack on the city. He and his wife Susan Abraham strongly deny he has anything to do with the CPI (Maoist) group. The writ petition challenging his arrest has been placed for final arguments before the Bombay high court on Dec 12. Now lodged in Nagpur central prison, Gonsalves responded to this interview with Devika Sequeira of Deccan Herald through his family. Excerpts:

You moved out of Mumbai in the early 80s to organise contract labour and peasants in Chandrapur. How close were you to Kobad Gandhy?

Moving out of Mumbai wasn’t that rare a phenomenon those days. Through the 70s and early 80s individuals and groups made similar moves to Nanded, Dhule, etc. Anuradha and Kobad Gandhy, my wife Susan and I were some of those who brought up the tail end. After moving we were regularly in touch. When Anu and Kobad too took up union work, we worked together a lot. After I moved to Mumbai we haven’t maintained contact. Ideologically we were all Marxists, quite convinced that the Indian situation calls for revolutionary change.

Your defence says the charge that you are a member of the banned CPI (Maoist) group is trumped up, so is the claim that you were planning to plant explosives in Mumbai?

All the cases against me, including the charge that I’m a CPI (Maoist) leader are known to the police to be totally false. After being watched and followed for months, I was kidnapped and bundled into a car on August 19, 2007, by Andhra Pradesh and Maharashtra police just a short distance from our house in Andheri, Mumbai. The charge of planning blasts in Mumbai is patently absurd to anyone knowing the history of the naxalite movement of the last 42 years. There hasn’t been a single offence registered in Mumbai against any person or organisation with naxalite sympathies for over two decades. They therefore created this absurd story and prepared false papers of recovery of country arms and explosives.

Individuals have their place and importance and can sometimes come to even symbolise a movement or cause. But the media’s need to lionize or demonise, and thus often trivialise, can take away from the big picture. Mere lingering over the lives and images of a few can make one imagine that all the resistance is the project of a few heroes (or villains) while forgetting that these few are only representative of issues with a few millions already involved and many more millions waiting to step in.

After all these years of playing the rebel do you still think there is a cause worth fighting for?

Your question seems to suggest that people like me have been backing a lost enterprise. But I honestly think that it is reasonable to be optimistic of the winnability of projects for change — revolutionary change. As for the need for change, even years of five per cent plus growth rates have only accentuated rather than subdued the contradictions.

And as long as the system continues to sustain and engender wrongs, there will be those who think and need that they be set right. These are the agents of change. Just think of the millions that have and are being wrenched from their homes and histories by the so-called ‘development’ of our growth model. Isn’t theirs a cause worth fighting for?

Is violence in a struggle for social equality justifiable?

Violence in movements is hardly ever about ends justifying the means. I’ve yet to hear of an oppressed and weaker people choosing violence as a first option against those who govern. It’s only when their very survival is at stake or their plea for justice is violently put down that they are forced to defend themselves with whatever means available to them.

Almost all those who’ve taken to arms have reached there via the route of petitions and pleas and non-violent agitation that was brutally suppressed. When reports appear more frequently of activities in non-violent movements like Narmada Bachao shifting to other means I’m not surprised. They’ve faced tremendous violence from the state without even getting near what is constitutionally guaranteed.

Actually it’s the approach of the ones in power that’s decisive on the question of violence. If they are ready to abjure their violent protection of injustices in society, I don’t think there would be anyone who would use or advocate violence for social justice and equality. But when will that be? Kalinganagar, Singur, Nandigram and Lalgarh tell their own story.
Posted by nickglais on 12/07/2009 12:36:00 PM