Riot policemen beat a protester during clashes on the first anniversary of the killing of a teenager by police in central Athens, Greece, 06 December 2009. Clashes broke out between police and demonstrators across Greece as marchers commemorated the first anniversary of the shooting death of a teenager by police, an incident that sparked the worst riots the country had seen in decades

At Syntagma square motorised police forces (Delta team) charged the march from Ermou street. After the charge the Delta-team thugs dismounted and threw rocks at the protesters. As a cause of the police orgy in violence, an elderly member of the Worker’s Revolutionary Party-Trotskyist (EEK) has been reported to be in serious condition due to head injuries: Ms Koutsoumbou, a veteran prisoner of the anti-dictatorship struggle, was hit by a Delta force motorbike during the mounted charge on the crowd. According to Savas Michail, leading member of EEK and major radical philosopher, Ms Koutsoumbou is in intensive care having received far worse hits than during her tortures by the colonels' junta. One more man has been hospitalised with serious injuries. 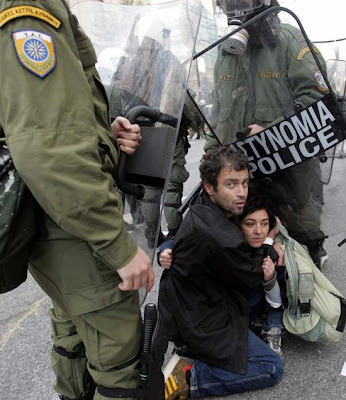 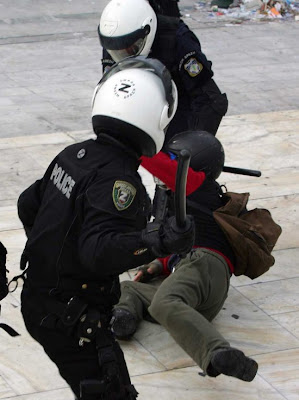 Riots have broken out in Athens and Salonica during the first day of A. Grigoropoulos murder anniversary with police demonstrating extreme brutality leaving two people seriously wounded by a motorised charge on the Athens march.

Police brutality during the marches to comemmorate the first anniversary of Alexandros Grigoropoulos murder surpassed any limit today, in a coordinated operation of barbarity and crude violence against protesters across greece. Under socialist orders police violence has left dozens of people wounded.
Posted by nickglais on 12/06/2009 11:37:00 AM