Lalgarth: Intellectual Reaction to the Maoist presence and the role of the Maoists by Amit Bhattacharyya 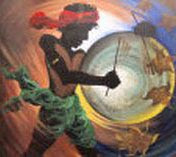 It is crystal clear that the intellectual response to the Lalgarh struggle is basically different from what we had seen during the Singur and Nandigram struggles. Here, they did not stand up to state repression in the way many people expected them to do. On the contrary, they have become very critical of what have been going on in the region. Those who came forward at the early stage later retracted and kept mum. Meanwhile, the tide was blowing for a ‘change’; the total isolation of the CPI(M) got reflected in the elections, and one section among the intellectuals found it more attractive to keep closer to the prospective winner—the TMC—in the approaching elections and receive bouquets and cushy jobs as ‘biddwajjans’(learned personalities). (However, as later events have shown, some of them did not have either the wisdom or the minimum courage to stand up to state repression and constant intimidation coming from the corridors of power. In the face of such timid response from this section of intellectuals, the present writer feels the absence of late Samar Sen much).

In fact, artists and writers who visited Lalgarh and met Chhatradhar Mahato after the beginning of ‘Operation Lalgarh’ seemed to have been particularly concerned with extracting a statement from Chhatradhar Mahato condemning Maoist violence and also openly distancing the PCAPA from them, as only then would they be in a position to mediate between the state and the PCAPA. One well-known prize-winning writer informed us through an article published in a Bengali daily Bartaman that the destruction of Anuj Pandey’s palatial building was the outcome of a secret understanding between the CPM and the Maoists, as that would fetch a massive amount of money for the CPM boss from the insurance company. In this way, she exposed her appalling poverty of thinking; at the same time, she also sought to tarnish the heroic struggle of Jangal Mahal and humiliate the people fighting for their dignity and for justice. One can only pity such intellectuals. What is important for our purpose now is that the response of this section of the urban literati depends on the part played and influence exercised by the Maoists in the Lalgarh struggle.

First, the people of Jangal Mahal had been continuing their movement quite well. It is the Maoists who entered the scene from outside and made a total mess of everything and misguided and derailed the movement. It is their violent activities that brought joint forces into the scene. The result is that the people are now being sand-witched between state terror and gun-toting Maoists or ‘non-state’ actors, as civil rights organizations such as the APDR are fond of describing it. The most bitter attack, however, came from the two Delhi-based historians—Sumit Sarkar and Tanika Sarkar. In a journal they wrote an article in the most malicious manner, some portions of which are as follows:


“Maoists have done incalculable harm to the movement. Their activities and intentions are shrouded in mystery, their secret terror operations express total indifference to human lives, their arms deals lead them…into shady financial transactions with rich and corrupt power brokers…They come into an already strong and open mass movement, they engage in a killing spree discrediting the movement, and then they leave after giving the state authorities a splendid excuse for crushing it”(Economic & Political Weekly, June 27-July 10, 2009).

Second, it is the Maoists who have derailed the movement towards a violent and undemocratic path. These are the main points of attack, although there are other minor points. For the time being, we will concentrate on these points.

Chhatradhar Mahato has stated that the People’s Committee consists of different political forces, the Maoists included. The Maoists have mass base. They are in their place as we are in ours. The Maoist leader, Kishenji made a press statement that they had been working in Lalgarh from the 1990s. In fact, from the historical point of view, the MCC had been active in the region from the 1980s and the CPI(M-L) People’s War in places such as Belpahari, Garbeta, Shalboni, Lalgarh, Banshpahari, Ramgarh, Sarenga etc from the mid-1990s. The issues over which they fought were as follows: against corruption in the panchayets; to ensure proper distribution of grants coming through government projects such as forest preservation samiti which rightfully belong to the adivasis; against the felling of trees useful to the people; for raising the price of kendu leaves etc. People in the urban areas can still remember the extent of police repression in the zone from 2001-02. Behula Kalindi and Sulochana Kalindi of Belpahari were forced to undress by the raiding police party to enable the police forces ascertain their sex. When Jaleswar Soren was not found in his house, his ten-month pregnant wife, Sulekha Soren was taken away and sent to Midnapur central jail which the government calls ‘correctional home’ on charges of waging war against the state. Pyalaram Mahato, an 87-year old man who was even unable to walk alone as his jail-mates would testify, was charged with the ‘offence’ of being a People’s War squad member. A woman named Meena Sardar of Belpahari was so traumatized by what the raiding police party did to herself, her mother and her house that she lost her mental balance; when she was released on bail after spending months in jail, she became totally mad, stayed at her home with her mother by becoming a ‘liability’, and ultimately died in that state without any treatment. One can distinctly remember also how Prof. Kaushik Ganguly was arrested and beaten up at police lock-up, how Abhijit Sinha, a government official, was haunted by the fear of being arrested and tortured by the police and how he died near railway lines under mysterious circumstances in 2002. The Jhinka jungle that has become news during ‘Operation Lalgarh’ for being a Maoist hideout, is the area where the body of the People’s War activist, Ashim Das @ Kanchan was found with marks of wound on all parts of the body some years back. It was, according to the findings of civil rights bodies, a case of fake encounter killing. Many village houses were destroyed, ravaged and looted by the police and paramilitary forces. People were beaten brutally as if such acts of torture were the birthrights of the state forces, property was looted, kerosene oil was dropped into wells which were the only source of drinking water for the villagers, grain was mixed up with cooked rice, house-deeds, documents, ration cards and other things were simply taken away never to be returned. Civil rights bodies such as APDR had published many fact-finding reports of such despicable acts done by the WB police forces. However bitter it might sound, the fact is that a large section of city intellectuals paid no attention to these things at that time and were only too concerned with receiving patronage from the West Bengal government.

The reality is that the Maoists did not fall from the sky, nor did they come from a different planet; their social root lies in the soil of Jangal Mahal, however disturbing it might sound to the (a-)historians and sections of those ‘learned personalities’. The list of proclaimed Maoist ‘offenders’ that the police forces have furnished will show that with the sole exception of Kishenj who hails from Andhra Pradesh, all others are sons and daughters of the soil—either adivasi or non-adivasi. Some of them are Sasadhar Mahato, Jagori Baske, Karan Hembrom, Bimal Mandi, Jyotsna, Tarit Pal, Sudip Chongdar and Sumitra Sardar. (HT, Kolkata Plus 26 June 2009). According to reports, all of them did political work in the region at one time or other. Thus the statement that the Maoists are external to the movement, that they have just entered the scene all on a sudden and taken control of it, does not have any factual basis at all.

As to the ‘sandwich’ theory circulated by sections of the intellectuals and the media, it can be said that the advocates of this theory hereby have actually been portraying the masses in a way that they are devoid of any thinking of their own, that they are like unthinking, unfeeling robots who can only follow, but cannot lead. In this way, these urban intellectuals, themselves keeping a safe distance from the actual field of battle, pose as being possessed of all earthly knowledge and from whom the ‘ignorant’ adivasis must learn the art of how to conduct the movement. The sooner these ‘learned’ fellows come to their senses the better.