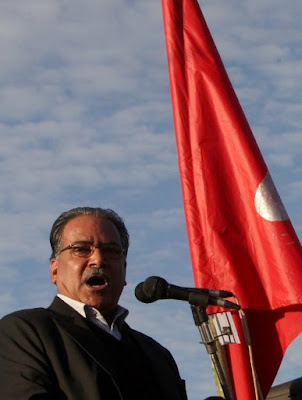 (AFP) KATHMANDU — Nepal's opposition Maoists on Sunday called a nationwide general strike to protest against the deaths of party activists in a clash with police, further raising tensions in the Himalayan nation.

Demonstrators burned tyres on the streets of the capital Kathmandu and set fire to cars and motorbikes, while shops and offices remained shut on Sunday -- usually a working day in Nepal.

The Maoists' action was sparked by the deaths of at least four party supporters in a clash Friday with armed police in the west of the country, where landless people had occupied a large area of government-owned land.

"We will strictly enforce a nationwide strike to protest the brutal force used by police against the squatters," Ganeshman Pun, head of the Maoists' youth wing the Young Communist League, told AFP.

"The government must investigate the deaths of these people, who should be declared martyrs."

Riot police were deployed across the country to prevent outbreaks of violence and police said the protest had so far been largely peaceful.

"The Maoists are blocking the roads and shouting anti-government slogans. All shops and schools have remained shut," said police official Raj Kumar Adhikari.

The Maoists waged a bloody decade-long war against the state before winning elections last year, but their government fell in May after the president overruled their decision to sack the head of the army.

Since then they have held regular protests, preventing parliament from sitting and paralysing the capital.

The latest strike comes amid growing international concern about the slow progress of the peace process in the desperately poor country, where many people have seen little improvement in their lives since the war ended in 2006.

On Saturday, the United States' most senior representative in Nepal expressed "deep concerns about the ongoing political stalemate" and said recent Maoist actions were inconsistent with the party's stated commitment to peace.
Posted by nickglais on 12/06/2009 01:52:00 AM