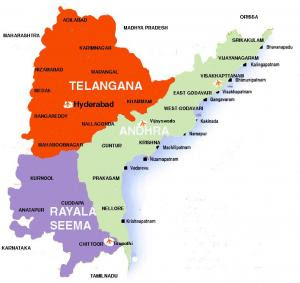 The central government recently announced that Telangana in Andhra Pradesh would become a new state, but it is beginning to backtrack. The Telangana area has a rich history of revolutionary struggle, going back to the early 1950s and up to the present. The CPI (Maoist) and its predecessor organization in Andhra Pradesh, the CPI ML (People’s War), have historically supported this demand, and is now supporting the demand for Gorkhaland in far northern West Bengal, where there is a large Nepali-speaking population.

Hyderabad is part of Telangana: Kishenji

Maoist leader Kishenji has said Hyderabad is an integral part of the Telangana region and the city should be made the capital of the new state when it comes into being. “Hyderabad is a part of Telangana and will stay so. There is no question of disassociating Hyderabad from Telangana,”

Kishenji, who hails from the region, which has a substantial Naxal presence, said over phone from an undisclosed location on Saturday evening. Asked why there was so much controversy over Hyderabad, Kishenji said: “It is because of some retired and serving bureaucrats who own huge chunks of land in the Greater Hyderabad region.” “Nearly 40,000 acres of land, a large portion of which have vineyards, are in the hands of some retired and present bureaucrats,” Kishenji said.

The Maoist leader expressed support for the creation of Telangana and accused the Congress of “depriving” people of the region of their legitimate rights by “backtracking” from its move to bifurcate Andhra Pradesh.
Kishenji alleged the Congress does not want to create a separate state of Telangana and is therefore creating disturbances in the state. This is not the first time the Congress is going back on its word, the Maoist leader said, adding: “It had denied the people of Vidarbha a separate state earlier.”

Kolkata: A demand for autonomy for three tribal-dominated districts of West Midnapore, Bankura and Purulia in West Bengal was today made by a top Maoist leader, who also justified the Gorkhaland statehood issue. “We demand autonomy for the three districts on the lines of the Darjeeling Gorkha Hill Council,” Maoist leader Kishenji told PTI from an undisclosed location.

He alleged that the West Bengal government had denied the legitimate rights of the people of the districts. “We demand autonomy to protect the language, culture and religious beliefs of tribals.”

Asked if he meant statehood, he replied, “the people of the three districts are not yet prepared for statehood.” Queried if it was part of the demand for a ”greater Jharkhand”, Kishenji said, “That demand is no longer relevant.”

The scenario has changed. “Moreover the formation of Jharkhand has not solved any problem. Going forward with the ”greater Jharkhand” demand will not solve the problem of tribals,” he said.

Kisenji, however, supported the demand for Gorkhaland in Darjeeling stating that it was “legitimate”. “It is the oldest demand for a separate state. They should be allowed a separate state to focus on their development as the state government has neglected the tea and tourism industry there,” Kishenji claimed.

The Gorkha Janamukti Morcha (GJM), agitating for separate Gorkhaland state in West Bengal, India, has called for four-day general strike to pressurise the central government to meet its demand.

The general strike, called shortly after the central government announced to initiate institution of Telengana state, from Monday has affected the normal life in Darjeeling and surrounding towns. All government offices, schools and transport service within the proposed Gorkhaland state have been shut. Local cities experienced large demonstrations on Sunday evening.

Nepalis living in Darjeeling and Kalimpong areas have returned home on Sunday ahead of the shut down strike. The strike affected the border markets in Nepal as well. Majority of the customers for the border markets Pashupatinagar, Manebhanjyang come from across the border.