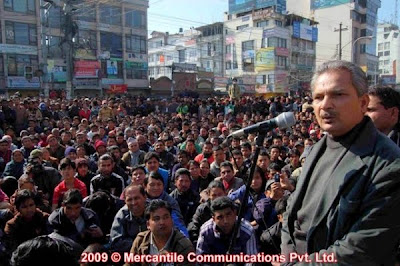 Addressing a mass meeting in New Baneshwor on the second day of the Maoist-called nationwide strike on Monday, he warned that if the government resorts to excessive force against the demonstrators then the Maoist activists will be compelled to retaliate.

Dr Bhattarai claimed that the "people" have taken to the streets as the current government has gone against the aspirations of the people and the Constituent Assembly.

He also urged the security personnel to lend their support to the nationwide strike called by his party, as it is in favor of the country's people.

He further said that his party will continue the nationwide strike until their demands regarding 'civilian supremacy' are addressed.

On Sunday, Baburam Bhattarai had accused the government of acting against the Interim Constitution by using excessive force against the demonstrators and said the three day bandh would continue
Posted by nickglais on 12/22/2009 12:21:00 AM