In a statement, the Office of the High Commissioner for Human Rights (OHCHR) Nepal observed that the police used excessive force during General Strike 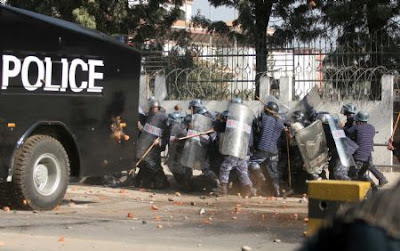 The second day of the three-day general strike called by Nepal’s opposition Maoist party witnessed torching of vehicles and violent demonstrations across the country.

While the situation was comparatively under control in the capital, Unified Communist Party of Nepal (Maoist) supporters burnt vehicles in Biratnagar, Jhapa and several other towns.

Like Sunday, Maoists came out to the streets of Kathmandu in the wee hours and started blocking roads by putting up temporary barricades and burning tyres. Educational and business establishments remained closed for the second consecutive day.

Heavy deployment of security personnel was seen at places where clashes between Maoists and security forces were witnessed on Sunday.

The UN too has expressed concern about violence on the first day of the strike especially the clash between protestors and police at New Baneshwor while trying to clear the road for the prime minister’s motorcade.

In a statement, the Office of the High Commissioner for Human Rights (OHCHR) Nepal observed that the police used excessive force including inappropriate use of batons, tear-gas and stones to dispel demonstrators.

Addressing a gathering at New Baneshwar on Monday, UCPN (M) vice chairman accused the government of using unnecessary force on demonstrators and threatened that the strike will continue till the government restores ‘civilian supremacy’.

“Deputy Prime Minister Vijay Kumar Gachchadhar and Home Minister Bhim Rawal are responsible for Sunday’s violence. If such excessive force is continued to be used our workers will be forced to retaliate,” he said.


Home Minister Rawal, however, maintained that the security forces exercised maximum restraint during the strike and resorted to baton-charge and use of tear gas only when the demonstrators turned violent