What is Direct Action by Harry Powell 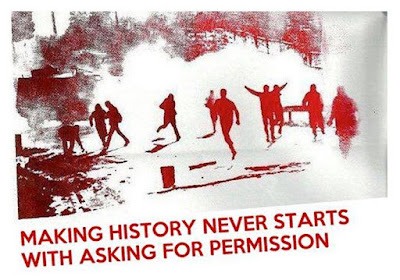 In recent years in Britain it has become clear that traditional methods of political protest - demonstrations, public meetings, petitions, etc. - which have been used to campaign against cuts in public services and bad practices by business firms are largely ineffectual; they don’t achieve their objectives.  Thus it is necessary to use and develop more challenging and effective ways to disrupt the oppressive and exploitative operations of the State and big business.

I refer to forms of direct action. So what is meant by this term?  In what ways is direct action different from other types of political activity?

I suggest that the term ‘direct action’ should be used to refer to activities which have the direct aim of obstructing and disrupting the operations of the State and business organisations.

For example, going into and stopping a local council meeting passing a cuts budget is direct action whereas standing outside the meeting place with placards and giving out leaflets is not direct action in this sense. Holding a public meeting to demand that the Trident nuclear missile programme is not renewed has no direct impact on the State whereas blockading the entrance of a military base involved with nuclear weapons is direct action.

Occupying the offices of private companies trying to get people off Disability Living Allowance is direct action while simply giving out leaflets to the public exposing this attack on disabled and sick people is not direct action.  Non-direct types of political action do need to be used as well as direct action.  The two can complement each o their but the limitations of non-direct action should be clearly recognised.

Direct action can be violent or non-violent.  It can be directed at persons or things and it may involve law-breaking.  Actions can be carried out by individuals, small groups or very large numbers of people.  An important aspect of direct action is that it encourages people to break rules designed to protect the rich and powerful and gives them self-confidence in so doing.  Small challenges can lead on to bigger ones.

The main types of direct action are:

They are used less often than in the past because of laws against these  actions.  This does not mean these methods cannot be used on suitable  occasions.

Council Tax has to be paid directly by those eligible and so is an easy tax to  withhold. As was shown by the Anti-Poll Tax campaign, this can be a very  effective way of undermining the State.  It is particularly appropriate as a  protest against cuts in local public services.  To be effective such action  needs to be on a mass scale.

This can be effective when authorities, especially the police, are trying to  remove protesters from some space or other.

Preventing access to some establishment or thoroughfare.  Usually, but not  always, it requires large numbers of people. This often attracts media  attention.

These can be of open spaces, as with the Occupy camps, or of buildings of  various types, e.g, government offices, company headquarters.  The UK  Uncut movement used this effectively in occupying retail premises such as  tax-dodging Vodaphone.

Environmentalists have climbed onto buildings, monuments etc. to display  slogans and this has attracted much media attention.

Damaging facilities and equipment is a direct way of attacking companies and  state organisations.  For example, protesters have broken through the  fences at RAF Waddington to try to disable the drone control centre.

Politicans and unprincipled business people have been getting away with a lot  without suffering any personal accountability.  They should be pestered with  phone calls and emails.  Their homes should be picketed.  They should be  confronted on public occasions.

The state and business organisations are now heavily dependent on  computer technology.  Hacking into these systems is a way in which  considerable disruption of their oppressive and exploitative activities could be  brought about.

Some people hesitate to engage in direct action because they fear it may be  illegal. Many of the types of direct action mentioned here are illegal or could be construed as such by the authorities.

The truth is that in Britain today there exists a matrix of laws which enable just about any type of political activity to be declared illegal if State bodies chose to do so, e.g. setting up a campaigning stall in a public place.

Even if some activity cannot be decreed illegal under present laws the State will quickly pass new laws to make it so.  Indeed, the Tory Government is intent on placing further restrictions on taking industrial action even though the trade unions have for the most part been impotent in defending their members.

We should distinguish between laws formulated to protect the common welfare, e.g, traffic regulations, and those primarily designed to protect the interests of the rich and powerful, e.g. libel laws.

It should not be forgotten that politicians and business people do not hesitate to break the laws they have formulated if it suits them e.g. waging illegal wars, banks swindling their customers.  Of course, we should try not to unnecessarily behave in ways which make it easy for the State to catch us.

Even so, don’t be afraid to tread on the grass.

Some campaigners, especially environmentalists and anarchists, put great emphasis on direct actions being non-violent.  In Britain today protesters of all types are not trained and equipped to successfully engage in violent confrontations with security guards and police.  To do so would result in defeat and prosecution.  It makes tactical sense to engage in non-violent actions.

At the same time we should be aware that if our actions achieve some degree of success then the powers that be will respond firmly.  They will not hesitate to use violence against us if they consider it necessary.  What is more, past experience shows that the police can be particularly brutal towards people they know will offer no resistance to such attacks, e.g. pacifists.

Protesters should realise that any effective direct action will turn violent at a certain point and that we should be prepared to defend ourselves. If our opponents know that we are prepared to resist assaults upon us then they will be less likely to use violence against us.

THE NECESSITY OF DIRECT ACTION

If we look at the history of popular struggles in Britain then direct action has been a vital element.  The early trade unions were banned so workers, such as the Luddites, had to resort to underground organisation using methods such as sabotaging employers’ equipment.

In the struggle to obtain the vote the Chartists used petitions to Parliament but these were rebuffed so they had to resort to physical force as advocated by Feargus O’Connor.

The suffragettes found that peaceful, legal methods to win the vote for women did not work.  Thus they turned to direct action of a very militant kind.  The bravery and militancy of the suffragettes a century ago puts to shame the feeble methods of protest being employed in Britain today.

The working class and middle strata in Britain have been under attack ever since the Thatcher Government came into office in 1979.  Earnings and conditions of employment have been deteriorating and public services have been cut back.

Since the financial crash in 2008 the capitalist ruling class and their political representatives - Tory, Labour and Liberal-Democrat - have become more open and bolder in their class war to browbeat the people into complete subservience to the rule of the rich.

It is high time to begin the fightback against this pack of parasites.  Direct action is an essential tactic. If the direct action approach is taken then at first it will consist of sporadic actions with limited success.

But these can spread and involve growing numbers of people as it is seen that you can stand up to the enemy and not be defeated,

The main way in which our masters restrain us is through what William Blake called “mind-forged manacles”, people accepting that it is right and proper to knuckle under to whatever assaults the ruling class throw at us.  We can begin to break these chains by striking back at the enemy through direct action.