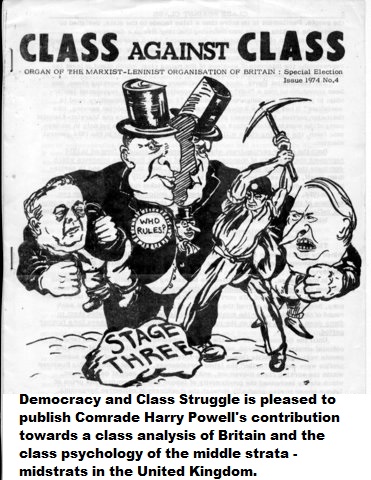 In contemporary advanced capitalist societies, such as Britain, there exist significantly sized middle strata economically and socially situated between the ruling capitalist class (bourgeoisie) and the subordinate working class (proletariat).

Such people obviously exist within contemporary capitalism but constitute only a few percent of the population.  Also the term ‘petit bourgeois’ has negative connotations and here the writer is attempting an objective analysis of the political behaviour of these people and not a moral evaluation of them.

Thus I will use the terms ’middle stratum’ and ‘middle strata’.  For an individual member of these strata I will refer to him/her as a midstrat.

THE MIDDLE STRATA IN CONTEMPORARY CAPITALISM

Much more numerous and significant than small business proprietors are the large numbers of managers, administrators, professionals and technicians who also occupy an intermediate position in the class structure. These people are in contradictory class locations between the capitalist class and the working class.  To some extent in their occupations they are required to act in the same way as do capitalists.  For example, managers do not actually own the companies in which they work but their task is to organise and discipline workers so as extract surplus value from them.

But also managers are waged/salaried employees who can be dismissed if they are no longer needed by their employers. In this respect their position is the same as that of ordinary workers.

Or consider teachers. They too are simply salaried employees who can be dismissed by their employers.  But also they are important agents of bourgeois ideological indoctrination.  Through sorting out children into different categories and imbuing them with certain ideas teachers play an important part in reproducing and maintaining capitalism.  They are moulding young people to fit into capitalist society.

There are several different intermediate strata.  They do not constitute a distinct, coherent class as do the capitalist class and the working class. The competitive capitalists (petit bourgeoisie) have already been mentioned.  More numerous and significant is the manageriat, managers in the private sector and administrators in the public and voluntary sector.  Their numbers greatly increased during the twentieth century.  Probably larger is the intelligentsia, various types of professionals and technicians whose numbers have also considerably grown.

Then there is the military, the armed forces and police (excluding their senior commanders) who are a very small percentage of the population but vital for the maintenance of the capitalist social order.  In the advanced capitalist societies these middle strata constitute somewhere between a quarter and a fifth of the total populations.

THE SOCIAL CONSCIOUSNESS OF THE MIDDLE STRATA

As Marx pointed out, it is social being that determines social consciousness.  The economic and social position of the midstrat is located between the bourgeoisie and the proletariat.  Given their role of supervising, controlling workers one side of their consciousness identifies with the bourgeoisie.  The working class is seen as being rather limited and for its own good in need of guidance from above.  Even when the middle stratum person is sympathetic to the deprivations suffered by the working class he/she still thinks that he/she knows what is best for them.

To some extent the workers are viewed as threatening, as potentially prone to engage in disruptive actions such as striking and civil disorder.  At the same time, the midstrat experiences a certain degree of oppression and exploitation at the hands of the capitalist class. In recent decades many members of the manageriat and intelligentsia have experienced reductions, at least relatively, in their income and status.  Especially among the lower levels of the middle strata there has been a degree of proletarianisation as in the case of teachers.  This breeds feelings of resentment towards the capitalists and thus some degree of willingness to engage in the sort of behaviour typical of the working class, i.e. trade union action.

Situated between the bourgeoisie and the proletariat, the middle strata are simultaneously drawn towards and repelled by the two main classes.  Their social consciousness is inherently contradictory, they are drawn towards and are going in two different directions at the same time.  It is the intermediate class position of the middle strata which fundamentally determines their social outlook and this strongly influences the practical ways in which they participate in politics.

When it comes to political action the middle strata are somewhat timid.  They are unwilling to challenge business corporations and state agencies in ways which could have serious consequences for those taking action.  Most middle strata people have significant stakes in bourgeois society, fairly secure jobs, mortgages to pay and other financial commitments. They fear that they could be penalised by losing their jobs.  Many, particularly in the public sector, believe that there are clauses in their employment contracts which could result in dismissal if they are prosecuted or even simply speak out on contentious issues concerning their employers. This seems to be a widespread belief among people working in the NHS.  In so far as there are any such provisions in employment contracts employees need to sort this out through their trade unions but the unions have shown themselves to be pretty useless at sorting out anything.

The hold of bourgeois ideology over the middle strata is stronger than it is in the case of the working class.  In particular they are very reluctant to do anything which is “against the law”. Very often they imagine that there exist laws restricting certain activities when in fact there are not, e.g. giving out leaflets to people in public places.  Even when such legal restrictions do exist they are difficult for the authorities to enforce, e.g. local regulations on where campaigning street stalls can be set up.  The police are reluctant to get involved in actions against political campaigners because they are understaffed and arresting and charging people makes a lot of work for them which they would rather avoid.  Very often the midstrat campaigner’s first thought in considering any action is, “Have we got permission?”

The middle strata place great value on polite, civil behaviour.  They have a strong desire to avoid any unpleasantness.  There is nothing wrong with this attitude in itself.  Indeed it can be contended that one consequence of Thatcherism in British society has been to encourage a certain lack of respect for others, a coarsening of manners in everyday life. But there are occasions when the desire not to disturb the status quo is inappropriate.  Midstrats are reluctant to seriously challenge and criticise politicians on public occasions.  They don’t want to bring about a “bad atmosphere”. The politicians trade on this attitude among their audiences and thus often get away with not being seriously taken to task on reactionary policies they uphold and implement.  The fact of the matter is that there are occasions when being unpleasant to politicians, public bureaucrats and business proprietors and managers is entirely appropriate.  These people need to be exposed.  But the midstrat is reluctant to engage in head-on confrontations with and attacks on these opponents. Midstrats want to avoid confrontation and conflict and very often this results in them falling into line with what their mastes want.

As for direct political engagement with the working class, the middle strata are trepidatious and tend to hold back. Many of them have a positive view of trade unions and see them as at least potentially a progressive force.  Some midstrats are trade union activists but usually in unions with predominantly middle strata membership, e.g. teachers’ unions, and are frustrated by their inability to get the members to take up militant actions. Progressive midstrats experience working class people as rather alien and difficult to approach.  When it comes to public campaigning they feel more comfortable operating in predominantly middle strata localities and tend to avoid the working class ones.

IS THERE ANY HOPE FOR THE MIDDLE STRATA?

From what has been said it might seem that the middle strata have very limited potential to be a force for significant, progressive change in society.  This need not be the case provided that midstrats come to consciously recognise the class determinants of their political outlook and thus are in a position to break out of its restraints and limitations. It should be recognised that the main way in which the capitalist class maintains its power is not through direct physical force but by means of ideological hegemony, the acceptance of ideas which serve the interests of the capitalist rulers.

In contemporary Western capitalist societies we still have considerable civil liberties although these are under attack, e.g. more anti-trade union laws.  The penalties which may be incurred for standing up to our rulers are minor compared with those incurred in more openly oppressive regimes such as in the Middle East.  Midstrats should dare to ignore the “Keep Off” notices and tread on the grass. They might find that they actually like it.

Interesting article from Harry Powell. I have to commend Com. Powell for actually attempting to analyse contemporary Britain. He is right about the middle strata; I look forward to reading more from Com. Powell.


I would be interested to read an analysis of the 'lumpen proletariat', and what this term means in contemporary Britain.