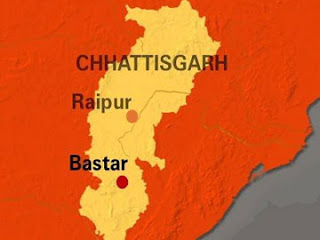 In a major blow to the outlawed Communist Party of India (Maoist), a senior commander of its military wing People’s Liberation Guerrilla Army (PLGA) was gunned down by Odisha police on Saturday morning.

“Sonadhar, the area committee secretary of Kanger valley area committee of the CPI (Maoist) was killed along with two other Maoists of Darbha division (in Bastar) by Odisha police today morning near Kotaguda village in Malkangiri district. Great work done by Odisha police,” Bastar range Inspector General of Police, S.R.P. Kalluri said in a statement.

Sonadhar was instrumental in the Jiram Ghati attack on Congress party convoy in May 2013 in which more than 30 people, including some senior Congress leaders, were killed.

He also played a major role in Tahakwada Maoist ambush in March 2014, which resulted in the killing of 16 people including 11 CRPF men.

Last year, Sonadhar went against his own party by increasing the “levy” which the Maoists collect from Truck drivers crossing through Darbha.

“Orissa police were not so active on the Maoist front especially in border area close to Chhattisgarh which made Sonadhar more complacent. He used to ride on bicycles in many border village with an AK-47 and an UBGL (Under Barrel Grenade Launcher).

On Saturday morning, Odisha police got an intelligence input of his presence in a village market. Sonadhar and two more Maoists were killed in the subsequent encounter,” informed the officer requesting anonymity.

The “activeness” of Odisha police has come as a big relief to Bastar police, who are planning to launch a major anti-Maoist operation in the coming months.

“We needed this kind of support from Odisha police. Now there will be pressure from all side and some senior leaders active in Darbha valley may surrender soon. But the killing of Sonadhar has come as a great relief. It is a major success on the anti-Maoist front in Bastar,” said another officer.
The other Maoist killed in Saturday’s encounter has been identified as Lachman from Darbha area of Bastar.

“Sonadhar and Lachman have been identified. The third deceased also belonged to the Darbha area in Bastar,” said Mr.Kalluri.