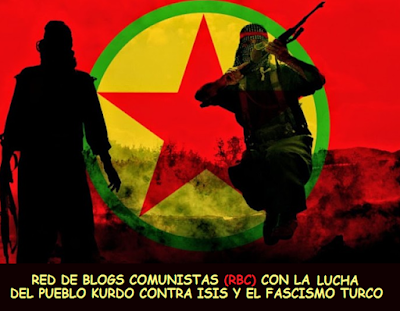 Communist Blogs Network (RBC) wishes to reiterate its firm commitment to solidarity with the peoples attacked and oppressed by imperialism.

On this occasion, especially with the situation in Kurdistan, the Kurdish territory where people are suffering the simultaneous and combined criminal action by the fundamentalist ISIS  created by the imperialist powers, the so-called Islamic State and Turkey, which, in turn, has already been bombarding for decades, suppressing and indiscriminately massacring the Kurdish population.

The Kurds, for their steadfastness in the fight and in the defense of liberty, have now become the main enemy of the Islamic State, ISIS, a group of mercenaries organized and financed from the offices of Washington, Brussels and Tel-Aviv with the main aim of destabilizing the Middle East and North Africa to facilitate the strategic, political and economic objectives of the great imperialist powers.

To do this, ISIS  Islamic State is causing carnage, especially in Syria and Iraq, precisely in the states through which extends Kurdistan, along with Turkey.

Meanwhile, Turkey, a NATO member and a leading US puppet in the area, for many years has been trying to exterminate all traces of Kurds and Kurdistan, and has not hesitated to seize the excuse of "fighting" ISIS to multiply their attacks and deepen their violence, trying to present the simultaneous bombing of the Islamic state in Syria and against the Workers Party of Kurdistan (PKK) in Iraq, in addition to the wave of arrests and repressive acts against the Kurds within Turkey, as a result of an anti-terrorist action, matching the Kurdish people, struggling for their right to self-determination against Turkish fascism and for survival with  the mercenaries of imperialism of the Islamic State.

The fascist Turkish state repression extends to all Turkish revolutionary organizations, to mention only some, the DHPK-C, TKM / ML, ESP,

It should be noted that the Organization of the North Atlantic Treaty (NATO) openly supports attacks by Turkey against Kurdish rebels, equating Kurdish Struggle with ISIS Islamic fundamentalism.

In reality, NATO, and Turkey, say they are fighting ISIS Islamic State, something they cannot do except theoretically, since they created this organization, financed, and armed it.

In fact, the forces that are seriously facing the so-called "Islamic State" are mainly the different Kurdish armed groups, both in Iraqi Kurdistan as in Syria, for in that battle played their existence as a people is at stake.

The bloody "ethnic cleansing" carried out by the ISIS  against populations, such as Yazidis (a Kurdish religious minority that lived in Iraq) shows what awaits them if they fall into the hands of ISIS.

Given the above, the Network of Blogs of Internationalist Communists organized this week of solidarity with the Kurdish people in their struggle against Turkey and the Islamic state, which devoted exclusively to publicize their situation invisible by the media propaganda

Also to report that Kurdistan is being besieged by the complicity of Turkey and the Islamic State, applauded and supported by NATO and the imperialist countries.

Honour, disseminate and support their glorious Kurdish struggle for its existence as a people for  self-determination against the states that occupy its territory, and its firm and strong resistance against this monster created by the Western powers, the Islamic State.

Long live the People's War of the Kurdish people!!

Solidarity with the struggle against imperialism and against all its criminals elements !!

A good revolutionary article. Right from so many years long ago, the communists are seen as revolutionaries. Though at present stage, so many people are having awareness about the need of communists to this world, so many people will not like to follow the communism because, if they follow such communism means, then they might be need to lost their savings and money. Being working as a research paper writer in one of the leading online research paper writing service, i have been supposed to go through the so many communism articles and also i have read the life history of great communist leaders such as Lenin, Fidel Castro, Mao-Tse-Tung and Juliusrosenberg. On reading all these great leaders articles, i have been able to understand one thing that, how much they have been struggled to implement the communism in their respective nations.