Venezuela : The Reality on the border by Jesus Rojas 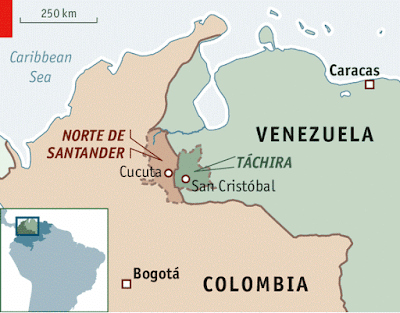 It is no secret that Venezuela has been a generous country with all its neighbors all the time: receiving refugees due to  the conflict which has been going on in Colombia for more than fifty years and it has not  been resolved yet. ; The Colombian government has tended to turn "a blind eye" to thousands of illegal immigrants and allowing them to settle on this side of the border to merge with nationals.

None of it would be bad if it had not reached the limits of unimaginable abuse and mess we see today and that we know is not a new reality, only that it touched  the bottom in a context of absence of the rule that allowed  smuggling, the economic bleeding, violence and absolute disrespect to the people of Venezuela;  a decent thing that no government can tolerate it.

This is the time where we have to look once inward a good time in our country to assume the historical political errors, debug corruption that allowed this state of things happen and recover governance and sovereignty in this age where the country begins (not where it ends). Because the responsibility for what happens there is shared, by action or omission of the two sides of the border.

Colombia enjoyed and abused this state of affairs because we were not able to put territorial order for many decades. And this is not an issue of xenophobia as the Colombian government  intend  to make it look, and not get caught up in xenophobia question which is their agenda,  but a matter of justice and governance, and ending criminality in the border areas to destabilise Venezuela.

The Colombian government wants to cover up its misconduct because it is the only one in the world that protects, legalize smuggling and money laundering. In addition, they are those who have been leading this state and have persecuted his own people. The Colombian oligarchy mounted a crime industry in that area that live off drug trafficking, smuggling of gasoline and food extraction and extortion.

That a  Venezuelan can not get soap  to wash himself or a food package and see how those domestic products are smuggled and  sold by  kilos in the neighboring country is outrageous. That our  gasoline be taken away, as if it were water, is inadmissible. Theyhave subjected our whole border towns to gangster (paraco)  terror is unprecedented. That our paper money be carried away to go bankrupt the economy generating an inflationary spiral is immoral.

And  be  questioned for closing the border to end this is an act of profound hypocrisy and cynicism.

We care nothing if  Santos was caught in  the problem in Colombia, if they are going to denounce us in the OAS, the UN or the Heavenly Court. VENEZUELA IS RESPECTED.

We support  President Maduro  with these measures and that will surely continue for closing  this chapter very disastrous of abuse to Venezuela.
Posted by nickglais on 9/07/2015 01:10:00 PM