The French Maoists conducted an interview with DHF 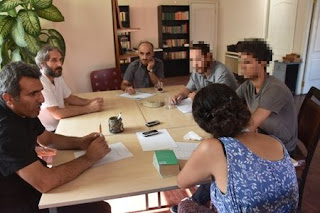 The French Maoists met with DHF, learning about the situation in general and the political line of DHF. The interview will be published in the newspaper of the French Maoists.

REDACTION (08/30/2015) – The Maoist Communist Party of France was present in Turkey / North Kurdistan for several meetings and political activities. Members of PCmF met with ESP following the massacre of Suruç and with SGDF hospitalized members to express their support and solidarity.

Were discussed the analysis of the socio-economic structure of Turkey / North Kurdistan, the program and perspectives of DHF, the principles of organization and work style of DHF, the reasons for the alliance with the HDP .

As well as perspectives exchanges about important topics such as the massacre of Suruç and the concept of war who is going on, police operations specifically aimed DHF, in the middle of global  attacks, the solutions of perspectives on the Kurdish question, solidarity and international action. DHF representatives have answered all these questions with a complete description of their programs, perspectives and solutions devised.

More comprehensive analyzes have been made about the long-term and short-term plans of DHF for the coming period. This successful meeting ended with a summary of the approaches and the general situation made by the PCmF.

Here is a general summary of the discussion;

Capitalism has entered a new crisis and conflict will intensify around the world, including Europe where they were born. The war in Syria is a very clear expression of crisis and conflict. The war in Syria is a battleground between the imperialist forces. The economic crisis in Europe is rising and the bill is presented to the working class. Pointing to the declining living standards of workers steadily, and the impoverishment of the middle class, the French Maoists stressed that fascism was reinforced again in Europe.

The example of SYRIZA is an example of the failure of reformism. They also state that fascist ideology is increasing in Europe, finds a favorable response from the proletariat and workers. The French Maoists stressed the importance of showing international solidarity with the people’s war taking place in the world, like India, the Philippines or Turkey / Northern Kurdistan and expressed their agreement with DHF concerning the creation of a international revolutionary center, which they say is crucial.

The French Maoists have said that two Maoist groups in France were preparing to make a unification congress shortly. The congress will take place in November, and it will mean that they will enter into a new more comprehensive process. They said their main task was to create a powerful revolutionary movement in Europe.

The meeting ended by stating that it would strengthen solidarity and comradeship between the two organizations.