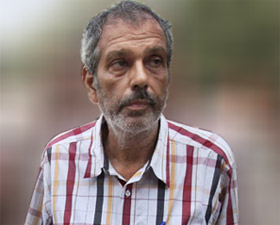 Kobad Ghandy  is a 21st Century hero of India and stands for truth and justice and is a light that exposes the brutality of the Indian comprador State and fake patriots of the Hinduvuta like Narendra Modi.

We salute India's proud son in his struggle for his health and the health of India.

The court is currently recording prosecution evidence in the case in which Ghandy along with co-accused Rajender Kumar alias Arvind Joshi is facing trial.

Ghandy is facing trial for alleged offences punishable under the Unlawful Activities Prevention Act(UAPA) and various provisions of the IPC. The court had framed charges against Rajender Kumar under several IPC sections.

During arguments on bail plea, Ghandy’s counsel told the court that his client was suffering from multiple ailments for which he required constant medical treatment which was not properly provided in the jail.

The court had called for a report from the superintendent of Tihar jail regarding Ghandy’s medical condition and after perusing it, the judge said, "it is apparent that Kobad Ghandy is suffering from a host of medical ailments".

"He (Ghandy) is aged about 65 years. His condition has visibly deteriorated during the period the trial of this case has progressed before this court," the court said.

Ghandy, an alumnus of the prestigious Doon School and St Xavier’s College Mumbai, is facing prosecution in around 20 criminal and terror cases in different parts of the country.

According to the police, he was said to be part of the top leadership of erstwhile CPI-ML (People’s War Group) since 1981. He allegedly continued as a Central Committee member in CPI (Maoist) after the merger with People’s War Group and elected to the Maoist Politburo in 2007.

Ghandy was arrested by Special Cell of Delhi Police for allegedly trying to set up a base for CPI (Maoist) in Delhi.

The court had on July 16, 2012 framed charges against him for allegedly being a member of a banned terror group and furthering its activities in violation of the UAPA.

He was charged under sections 20 and 38 of UAPA relating to membership of the banned CPI (Maoist) and furthering its activities.

The court had also framed charges against Rajender Kumar for the alleged offences of cheating, forgery for the purpose of cheating, criminal conspiracy and cheating by impersonation of IPC.

Ghandy was earlier absolved by the court of terror charges due to want of proper sanction and later, a fresh charge sheet was filed by the special cell with another sanction for his prosecution under the provisions of UAPA.

Thereafter, he was charged with the offences under UAPA.

He is also facing trial for allegedly committing forgery, cheating and impersonation.