Today on September 9th we commemorate the 39th death anniversary of Chairman Mao Tse Tung-the greatest Marxist of our time.Comrade Mao developed Marxism-Leninisim in every aspect and raised Marxism-Leninism to a new height.Mao Zedong thought or Maoism became the third stage of Marxism.Mao Tse Tung thought was a higher stage of Scientific Socialism. 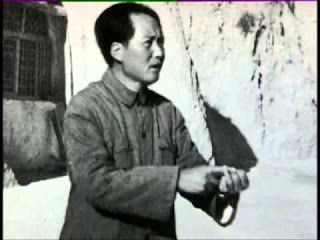 This article reflects the personal views of Harsh Thakor the Democracy and Class Struggle view is that of comrade  Ajith here.http://democracyandclasstruggle.blogspot.co.uk/2015/06/marxism-leninism-maoism-and-mao-tse.html

For Democracy and Class Struggle Marxism Leninism Maoism is integral social science and not a list from which people can pick or choose.

We uphold the universality of Protracted Peoples War and the particularities of its application in individual countries.

LET US DIP OUR BLOOD IN MEMORY OF CHAIRMAN MAO-THE GREATEST MARXIST OF OUR TIMES !lONG LIVE MAO ZEDONG THOUGHT OR MAOISM.! BY HARSH THAKOR

Today on September 9th we commemorate the 39th death anniversary of Chairman Mao Tse Tung-the greatest Marxist of our time.Comrade Mao developed Marxism-Lenisim in every aspect and raised Marxism-Leninism to a new height.Mao Zedong thought or Maoism became the third stage of Marxism.Mao Tse Tung thought was a higher stage of Scientfic Socialism.

There is still a strong debate within the Communist camp whether the terminology of 'Maoism' can replace 'Mao Tse Tung Thought'.Afterall we are still in the era of 'Imperialism and proletarian revolution' as propounded by Lenin and not of 'total collapse of Imperialism and all-round victory of proletarian revolution' propagated by Lin Biao.Marxism represnted the epoch of capitalism,Leninism the era of Imperialism ,while Mao Zedong thought was an extension of Leninism in the same era.

The C.P.I.(Maoist) saw no wall in the terminology of 'Mao thought' and 'Maoism.'

They elaborated that Maoism was more scientific or appropriate description of the ideology of Chairman Mao.Jose Mari Sison ,chairman of CPP,also felt that 'Maoism' and 'Mao Zedong thought' were the same thing and the meaning is exactly what the Chinese party had given it.

It is the Communist party of Peru who thought that they had a different meaning and Mao thought was different from Maoism.

The Peruvian party under Chairman Gonzalo in fact called it 'principally Maoism' internationally and 'principally Gonzalo thought' internally.Certain forces insist on Mao Zedong thought and deny that it is a higher stage of Marxism-Leninism.They feel even the thesis of continuous revolution under the dictatorship of the proletariat was a development within the stage or era of Leninism itself.

They feel that Protracted peoples war concept is not universal ,being only applicable to semi-colonial countries.

In their view to take an ideology to a higher stage it has to represent a new epoch or era.They question which new era does Maoism represent or what is the higher stage of Imperialism.

The Maoists confront this by stating that a qualitative leap can take place within one era itself and for an ism to reach a higher stage a new era dose not have to exist.

In past decades even erstwwhile organizations like C.P.I.(M.L.) peoples war group or Maoist Communist Centre upheld Mao Zedong thought ,while today still groups like C.P.I.(M.L)Red Star,Class Struggle,New Democracy and C.P.R.C.I.(M.L.) uphold Mao Zedong thought.Even comrades like the late Harbhajan Sohi did not recognize Maoism as the third stage.N.C.P.(Mashal) in 1992 tooth and nail opposed 'Maoism' in place of Mao Thought.

To me 'Maoism' or Mao thought' is not the issue as much as giving the ideology the correct meaning.It should not be equated merely with military line and it is only the theory of 'continuous revolution under the dictatorship of the proletariat' that gave Mao Zedong thought universal significance.

Only during the Great Proletarian Cultural Revolution did Mao thought become a universal ideology and an integral part of the body of Marxism-Leninism .

Mao's thesis of protracted peoples war was a development of Leninism and was the first full developed Leninist military theory but was applicable only to semi-colonial societies.

What would make to me decide 'Mao thought' or 'Maoism' is whether Mao Zedong thought can be termed as the Marxism-Leninism of today.

If so then Maoism can replace Mao Zedong thought.

It is fascinating that all from 2000 and  20001 the erstwhile Maoist Communist Centre of India and C.P.I.(M.L.) Peoples War group upheld 'Maoism'.However they recognized Mao thought as a higher stage in the course of waging armed struggle.The case of the Communist Party of Philippines was similar in 1995 when they adopted 'Maoism'

I recommend readers to thoroughly read the writings of Jose Maria Sison and the C.P.I.(Maoist)document on upholding the banner of MLM.

I think Com Ajith puts over emphasis on 'principally Maoism' and the factor of 'military line'claiming that PPW can be adopted in every country.

Argubaly today the dividing point of whether to launch PPW today in India or armed struggle is based on 'Maoism' or 'Mao thought'.

As an exception a group from the Communist League of India stream led by Sashi Prakash,the Rahul foundation upholds terminology of Maoism but rejects concept of protracted peoples war.

DEVELOPMENT, CURRENT STATUS AND PROSPECTS OF MAOIST THEORY AND PRACTICE IN THE PHILIPPINES

The Communist Party of the Philippine stands by its definition of Mao Zedong Thought or Maoism as the third stage in the development of the theory and practice of the revolutionary proletariat towards the ultimate goal of communism.

The ongoing stage of Maoism proceeds from the previous stages of Marxism and Leninism, respecting and upholding the theoretical and practical achievements of each stage, extending and developing them further and making new achievements.

Among the many great achievements of Mao, the aforesaid theory and practice constitutes his greatest. This inspires hope for a socialist and communist future against imperialism, revisionism and reaction.

Maoism encompasses the major contributions of Mao to further develop such basic components of Marxism as philosophy, political economy, and social science as first laid down by Marx and Engels in the period of free competition capitalism and the rise of the modern industrial proletariat in the 19th century. Maoism also encompasses Mao´s major contributions to further develop Lenin´s earlier theoretical and practical achievements in developing the aforesaid components and to carry forward the great victory of Lenin and Stalin in socialist revolution and construction in the era of modern imperialism and proletarian revolution.

In social science, Mao followed the teachings of Marxism and Leninism that class analysis is applied on a class society, that class struggle is the key to social progress and that class struggle in bourgeois society must lead to the class dictatorship of the proletariat over the bourgeoisie in the attainment of socialism. Mao´s class analysis of the semicolonial and semifeudal society enabled the Chinese Communist Party to win the people’s democratic revolution with the correct program and strategy and tactics, and proceed to the socialist revolution.

Mao stressed the necessity and importance of working class leadership through the Party and the basic alliance of the working class and peasantry in the new democratic revolution. He posited that the semi colonial and semi feudal society is in chronic crisis, and that the huge peasant population in the countryside serves as the basis for the strategic line of protracted people’s war and establishment of the revolutionary organs of political power even while the reactionary state still sits in the urban areas.

Mindful of the way modern revisionism arose in the cultural sphere and then the political sphere in the superstructure in the Soviet Union, Mao put forward the theory and practice of continuing revolution under the dictatorship of the proletariat through the Great Proletarian Cultural Revolution from 1966 to 1976. This involves a process of revolutionizing the relations of production and the superstructure through a mass movement led by the proletariat and its party.
Posted by nickglais on 9/09/2015 05:30:00 AM