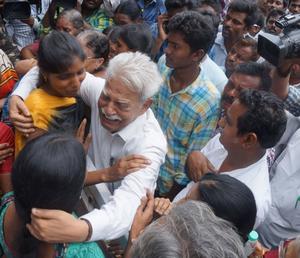 Democracy and Class Struggle  calls for the people of India to end to this of State barbarism of the KCR and the Modi Saffron Government.

The true patriots of India  are being tortured and killed and the Indian comprador collaborators - feast on the peoples blood - the cries of Varavara Rao are cries for Justice - the killer Comprador State will reap what they have sown.

He broke down and wailed inconsolably holding sisters of slain Maoist Sruthi alias Mahitha at the MGM Hospital mortuary.

Demanding the State Government own up the responsibility, he said that youth were being attracted to the revolutionary movement as the KCR’s Government failed to keep up its promises leave alone implementing the much-talked Maoist party agenda. “None asked him to implement Maoist party agenda. He himself claimed it. We all want the Government to function as per Constitution – giving people a chance to speak, express and differ,” he said.

According to intelligence reports, a total of 36 persons joined the Maoist party since the separate Telangana was formed. Scores of youth were disillusioned with the promises and functioning of the TRS Government. Mr. KCR promised a Telangana free from encounters. 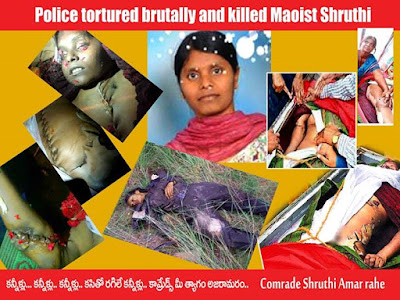 “KCR promised a heaven and nothing short of it. What is happening in Telangana is visible to all. In Warangal district alone, nearly 1,500 acres of land is being illegally mined by contractors. The tribals were questioning the government and young men driven by ideals are standing by these innocent tribals. Hence they are being killed in fake encounters,” Mr. Varavara Rao said.

The people of Telangana did not ask for gold or anything from Mr. KCR. All they want is peace, water for irrigation, land for cultivation and nothing else. Those labouring hard are denied their rights and fruits of labour. Those sitting in Parliament and Assembly supporting the contractors are making lots of money depriving the poor of their land.

“What happened to the promise of three acres of land to the SCs. Who is questioning the Government on this promise,” he said urging the people and the media to stand up and question the Government. 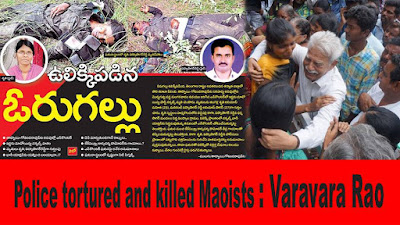 
Democracy and Class Struggle  says these are the barbarities we know about - but there are many - many more which are invisible to western media like most real struggles.

In Britain the establishment prepare to greet butcher Modi in November including paid for Labour Friends of India and associated political vermin.

Wonder if Jeremy Corbyn will speak out against the War against the People of India or just love the Indian comprador money that resides in London just like the rest of them ?

You should tell us what initials stand for at least once. For instance I didn't know what the KCR government were, until I looked it up somewhere else. Telangana Chief Minister K Chandrasekhar Rao.
Thanks.