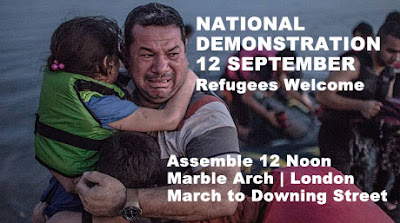 US and Britain - Stop bombing Syria and Iraq!

Stop the covert and overt military operations in the Arab World!

US and its European allies are responsible for the migrant crisis

Demand Britain to accept more refugees from the war-torn Syria and elsewhere!

The world suddenly woke up, with the heart-breaking images of the drowned Syrian Kurdish boy Aylan Kurdi who washed up on a Turkish beach, highlighting the plight of the refugees from the war torn Syria.

Europe was just watching when 3,000 people were known to have drowned trying to cross the Mediterranean in 2014, and when 2,500 deaths at sea were recorded in the first six months of 2015. No major international powers raised their voice to say that this was intolerable.

There was no ‘immigrant crisis’ until hundreds of thousands of people from war torn Afghanistan, Pakistan, Iraq, Libya and Syria literally marched into Europe smashing the razor blade fences. Their countries are ravaged by unwanted wars and conflicts.

They are displaced and unwanted everywhere on this planet. These migrants who are risking their lives sailing on rubber boats across the dangerous seas to get to safer places to live are giving us a message: the world has become unbearable!

Aren’t the US and their European allies such as Britain and France responsible for this migrant crisis?

Of course they are. This is the direct consequence of the war and killings sponsored by them that resulted in forcible displacement of millions of people from Afghanistan to Syria over for the last 13 years.

US and Britain have systematically destroyed Iraq and Afghanistan over the years making Afghans and Iraqis one of the largest group of refugees in today’s world and second largest entering Europe.

Permeating into the 2011 movement against the Assad regime in Syria, the US funded and armed various anti–Assad warring factions within Syria referring them as ‘moderates’. 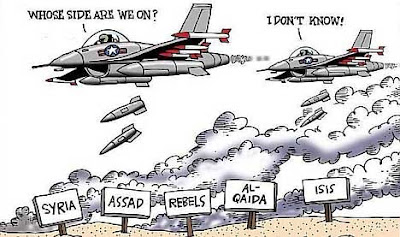 On the other hand, the monstrous ISIS that was originally created by the US itself is conducting genocide on the people of Syria and Iraq. As a result of the ongoing war between Assad’s regime and different warring factions such as ISIS, 25,000 Syrians have been killed, 7.6 million are internally displaced and more than 4 million have fled to Jordan, Lebanon and Turkey.

The spineless and obsolete United Nations has utterly failed to address this unprecedented humanitarian crisis in the recent past. It is just watching as a powerless spectator.

The countries which are fuelling the wars are refusing to take responsibility for their role or accept even a modest number of refugees.

Germany agreed to take 500 to 800 thousand migrants per year (interestingly this figure tallies with the number of people Germany needs annually to renew its shrinking workforce).

Britain has agreed to accept 10,000 refugees but using this as an excuse conducted drone strikes on Syria and killed two British born ISIS members on the very next day.

The biggest question is why Britain hasn’t conducted drone strikes on ISIS leaders who are not British born.

Thousands of innocent people including women and children have already been killed by US drone strikes in Yemen, Somalia and Pakistan because of the very fact that drones cannot distinguish between a group of armed people and a gathering for a wedding or a funeral.

Air strikes are already going on over Syria and Iraq for the past several months by the US led hypocritical ‘coalition to fight ISIS’ that includes Saudi, Qatar and Turkey.

It is obvious that US and Britain are pretending to be fighting ISIS, where as their aim is to oust Assad from power and replace him with one of their puppets.

While ISIS is being funded by Saudi and Qatar, Turkey is pretending to be fighting ISIS where as it is actually bombarding the Kurdish areas, which are demanding independence from Turkey.

The world has witnessed the plight of people in Libya as a result of covert military operations of Britain there. Probably the same is in waiting for Syria. We all must stop it from happening.