Telangana government showed its utter cowardice in arresting more than 10,000 people across the State and particularly in Hyderabad 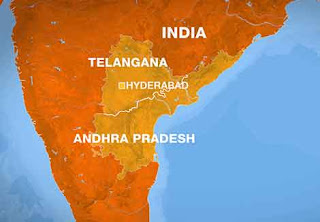 Democracy and Class Struggle says these 10,000 arrests across Telangana State gets reduced to a few hundred in the small coverage that Western Media including Russian Media accords to these events repeating the lies of Indian Government Media.

The invisibility of these real struggles for democracy in India in Western Media as well as the hypocrisy of most of the deaf dumb and blind Western Left in dealing with the outrages in Hinduvuta BRICS India drives us to a combination of outrage and despair.

We are however sustained by a profound belief in the Indian Masses who have demonstrated outstanding courage in facing down the Fascism in your Face of Hinduvuta of The Modi Monstrosity and who will not let India be turned in the living fascist nightmare that it has become in Telangana Today..

Today a rally in Hyderabad in Andhra Pradesh to protest against the fascistic encounters by the Andhra Pradesh police force was foiled by the security forces.

The state armed police pounced on the protestors and arrested them.

Such an act is an abject lesson to all democrats or progressive forces about how one cannot place faith in the so-called liberal bourgeois democracy.

Day by day the state's policies are becoming more and more repressive or fascistic.

In the past we had several protests against encounters by organizations in joint fronts which were allowed like in 1985.

We learn how the current state tramples upon democratic movements and only projects an image of being democratic.It teaches us that the govt only has semblances of bourgeois democracy and is turning fascistic.

Blessed by the tentacles of Hindutva or communal fascism the state is using every pretext of curbing democracy.

Even activists of parliamentary left parties were arrested. 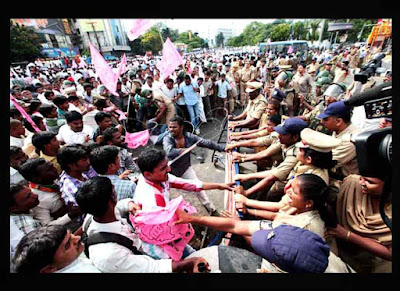 Today any forum sympathetic to the C.P.I.(Maoist) is suppressed brutally

This is unconstitutional and undemocratic as any person in a democracy has a right to express his ideological belief.

We need to form organizations of forums defending the people's right to struggle not affiliated to any political group.

Dark days of emergency are appearing in another form as well as years of encounters like in the previous decades.

In spite of facing such severe repression the C.P.I.(Maoist) is fighting back heroically through forums like Virasam.

The response to the rally from Telengana resembled a bonfire lit or a tornado appearing..

Today revolutionary democratic organizations are forced to work from underground like the Andhra Pradesh Radical Students Union in the time of emergency or also in the late 1990's,

The tentacles of the state will not defeat the of the broad masses whose revolutionary spirit will will be ressurrected even further after this massive suppression.

A march by Telangana Democratic Front (TDF) members to the assembly here to protest killing of two Maoists by the police was foiled on Wednesday as many leaders in Hyderabad and other districts were arrested.

Leaders and workers of various organisations were detained in different districts to prevent them from heading for Hyderabad to participate in the march.

He said arrests will not stop the movement. 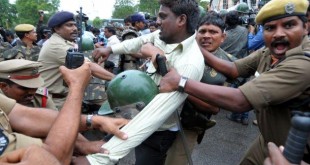 Well-known revolutionary writer Varavara Rao was taken into custody at RTC Cross Roads when he along with his supporters were proceeding towards the assembly building.

Leaders of CPI, CPI-M and other Left parties and people's organisations were arrested at Bagh Lingampally, from where the TDF planned to march to the assembly.

The assembly building in the heart of the city virtually turned into a fortress as police imposed restrictions on all roads leading towards the assembly. A large number of policemen were deployed in the area to prevent protesters.

Tension prevailed at Telangana martyrs' memorial at Gun Park in front of the assembly building when a youth tried to immolate self.

Alert policemen prevented him from doing so and arrested him.

Tension prevailed at Osmania University as students gathered on the campus to march in violation of the prohibitory orders imposed by police. Policemen in riot gear were deployed at the gates to prevent students from coming out.

PDSU activists took out a rally from girls' hostel but were stopped at NCC Gate by the police.

A heated argument ensued between student leaders and the police officers. The protesters were arrested.

Police also arrested two more groups of students including one at the library. Student leaders took strong exception to police entering the hostels and library. Scores of students and their leaders were arrested at Osmania University and Nizam College hostels since Tuesday night.

Police denied permission to the march on the ground that Maoists may participate in it and indulge in violence.

Those arrested in districts like Warangal, Khammam, Mahabubnagar, Karimnagar, Medak and Nalgonda include women and students.

Raising slogan against the government and calling for an end to "fake encounters", the protesters took out rallies in different parts of the state.

Veerabhadram said 3,000 to 4,000 activists were arrested across the state. He termed the arrests as undemocratic.

Maoists Shruthi and Vidyasagar were killed near Medaram of Warangal district on September 16.

It was the first such killing after the formation of separate Telangana state last year.

Terming it as a fake encounter, 370 organisations, including 10 left parties and the groups which fought for separate Telangana state, have come together under the banner of TDF to condemn the killings.

It is demanding probe by a sitting judge.

While denying permission for 'chalo assembly', police said it was reliably learnt that TDF was formed at the instance of CPI-Maoist and the programme was being organised in support of its cause and the ideology.


In spite of protestors arrested it gave rise to sporadic forms of resistance in and outside jails.

Literally a spark turned into a priarie fire with one demonstration branching out into Telangana government showed its utter cowardice in arresting more than estimated 10,000 people across the state and particularly in Hyderabad to scuttle a rally to Assembly aimed at requesting judicial enquiry into the brutal torture and killing of Shruthi and Sagar.

However, it gave moral victory to Telengana Democratic Front formed by 10 Left parties, about 400 mass organisations and dozens of independent citizens.

Though one rally was stopped by brutal force, at least 20 rallies, to and from police stations where hundreds were kept in illegal detention for eight hours, took place.

At least 20 police stations have provided as many public meeting daises with songs, speeches and dances, besides so much of friendly talk and bonding.

Irony is that the same day three years ago, Kiran Kumar Reddy government arrested hundreds and tried to scuttle Sagarahaaram