The British ruling class fears democratic space which is opening up right now- it is scared of that space, not Jeremy Corbyn by Comrade Sabnav 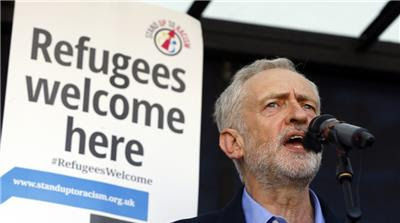 Democracy and Class Struggle publishes contributions from comrades on the meaning of the Jeremy Corbyn leadership of the Labour Party.

In British parliamentary democratic  history, for the first time peoples voiced against basic concepts of  the system.

There are now active voices now campaigning for removing the UK from NATO, establishment, and welcoming refugees. This is an unusual ethic in a country like Britain.

“The Labour Party is now a threat to our national security, our economic security and your family's security.”

This is the way  David  Cameron, the British prime minster  panicked with his victory.

The entire corporate media in UK, such as the Sun, the Independent, the BBC and any other high street media have started a deliberate propaganda against Corbyn, not knowing that the British working class, like the other European ones, has a long history of mobilising armed with the weapons created by its current masters.

The experienced working class are no longer feudal slaves.  Multi-national corporations and its political administrators implemented a slavery system during the past two decades in which working class are considered as voiceless, slave to its masters.

Since the great depression period, the ruling class created wage competition by globalising the work force, which enabled it to remove the basic workers rights, which the working class enjoyed in first world countries. Welfare state concept is abolished as communism is no longer a threat to the ruling class.

Multi-national corporation and ruling class controlled media, law and order, political thought process, education, technology and all the other super structures of the society.

The working class have never had the choice, during the past two decades, to come out of the fascist and dictatorship system.

For the first time Jeremy Corbyn, the back bench MP,  has come out and campaigned against some components of the existing fascist rule.

This is the reason people voted for Corbyn.  In the name of socialism or Marxism,

Corbyn may well chant any slogans, but he wants to restore the  basic capitalist democracy that the British people enjoyed before financial- corporate power emergence.

However we can draw these conclusions of his new active presence  and the support he receives:

1.       The working class is ready to fight.
2.       In case of a class leadership emergence,  it can lead the working class and the entire society which is being robbed by multi-national corporations.

Now, can Jeremy Corbyn restore at least the capitalist democracy? The answer is no.

What he proposes is to reform the existing political establishment which is built with multi–national corporations bricks, maintained with its engine.

In order for capitalism to exist, profit has to be maximised for the corporations.

Corbyn is trying to restore the society which will lead the capital owners to minimise the profit.
Capitalism has come a long way to reach the current crisis situation.

The only way to sustain this system is by implementing a fascist and dictatorship states.

Hence Jeremy Corbyn has to be part of that system to rule the country. It’s a simple equation, he can not restore even a capitalist basic democracy and save capitalism from crisis.

However Corbyn’s  emergence will open up debates in this society on the political side, which was indirectly banned from public discussion in the past.

It will provide a space for the progressive and democratic forces to organise and mobilise the working class.

By using this space, it is up to the progressive forces to build a new democratic thought among the working class and prepare it to change the political structure.

The British ruling class fears such democratic space which are opening up right now- it is scared of that space, not Corbyn.

It is the very reason why the entire British political community is attacking Jeremy Corbyn.

The Democracy and Class Struggle view is below :


Democracy and Class Struggle say the attempt to rebirth social democracy in Britain is supported by Varoufakis - it s a project which has already lost it sell by date and which may attract the dying remnants of British Trotskyism  - always a social democratic current that could never think beyond the market.