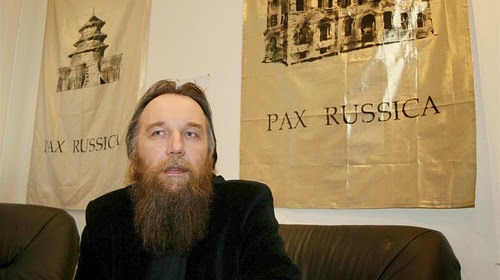 Publication of views of Alexandr Dugin is not approval of them but form the basis for an informed  critical examination of his influential views.
A process which we started last year with publication of Aleksandr Dugin - Radical Conservatism dressed up as Revolution.
SEE ALSO: http://democracyandclasstruggle.blogspot.co.uk/2014/04/aleksandr-dugin-radical-conservatism.html

This is just disgusting. Dugin is a marginal figure in Russian political landscape, he is too crazy even for the times we live in. His 'anti-imperialism' is the same as Hitler's 'anti-imperialism' (Adolf also loved to rant how Jews and Brits exploit the whole world) and his ideology has nothing to do with Maoism. To hell with such 'allies'.

If Maoism is too modern, then what about Bob Avakian?

The above is a comment from Moscow Red Cat .
We also publish some more from Moscow based Red Cat's Blog as we are sure this will be of interest to our readers.
"Unfortunately, many communists then believed that there were no antagonism between communism and nationalism (a view which some still share today).
The liberal press labeled this strange alliance the ‘red-brown bloc’ (communist-nazi bloc) in full accordance with the typical liberal view of communism as another version of nazism.
Some communists accepted this ‘definition’ proudly – this is also a sad characteristic of new Russian communist movement which was just recovering from devastating defeat. The ultra pro-Western orientation of liberals and Yeltsin regime, of course, helped these kind of views to take roots in the communist movement" .

Russians who opposed Nazi invasion in 1941 were called Red Fascists in 1950's by US Senators who had previously fallen over themselves in admiration for Hitler in 1930's.

Russians who oppose US Imperialism in its destruction of Russian Federation are called Red Brown Fascists by the Russian liberal press and US Imperialism as part of its propaganda war.

Such a label on patriotic Russians should be firmly rejected and not embraced by Leftists and we agree with Moscow Red Cat that accepting such a label is self defeating and is internalising enemy propaganda.

Moscow Red Cat we would like to publish your Black October post on Democracy and Class Struggle as a contribution to understanding contradictions between nationalism and communism in Russia.