“Venezuela is not a threat to any country,” refutes United States declaration that Venezuela constitutes an “unusual and extraordinary threat" to U.S. national security by Jesus Rojas. 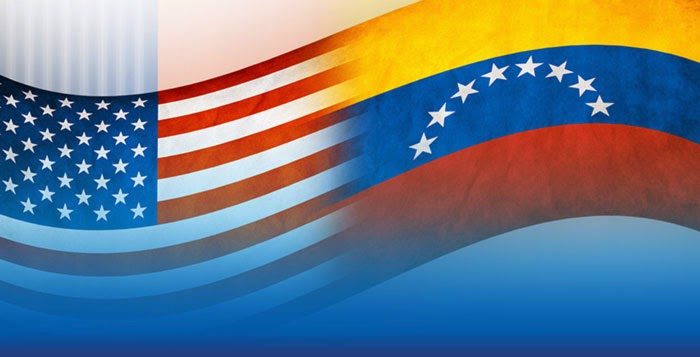 Democracy and Class Struggle says the country that is a threat to peace and security is the United States.

The new threats by the U.S. against Venezuela have galvanized support for the democratically-elected government of Nicolas Maduro.

Speaking at an anti-imperialist rally in Caracas Thursday, Venezuelan President Nicolas Maduro suggested that he would be willing to travel to the United States to confront President Barack Obama directly over his declaration that Venezuela constitutes an “unusual and extraordinary threat" to U.S. national security.


"Maybe I'll appear in Washington at that exhibition, to show my face for my country and tell the government in Washington they are committing grave mistakes," President Maduro said.

Venezuela is preparing to put on an expo in Washington designed to counter the misconceptions about Venezuela put forward by hostile media outlets.

The expo recently finished a successful run in Madrid, Spain.

Obama issued an executive order Monday declaring a “national emergency” over the alleged threat Venezuela presents to the United States, prompting fears that the U.S. is laying the foundation for military aggression against the country.

U.S. officials insist that the Obama government is not working to unconstitutionally oust Maduro from power.

However, a high-ranking official from the U.S. government-funded National Endowment for Democracy was caught secretly meeting with opposition figures in Venezuela.

Reporters also reacted incredulously when U.S. Department of State spokesperson Jen Psaki stated at a press briefing on Wednesday, "As a matter of long-standing policy, the United States does not support political transitions by non-constitutional means."

The U.S. government backed a 2002 coup against Maduro's predecessor, the late Hugo Chavez.

It also backed unconstitutional transitions of power in Honduras in 2009 and in Paraguay in 2012.

The new threats against Venezuela by the United States have served to galvanize support both within and outside Venezuela for the democratically-elected government.

“A tide of anti-imperialism is rising,” said Maduro during his speech in Caracas.

A wide-range of world leaders have called on the U.S. government not to interfere in Venezuela's domestic affairs.

Glenn Greenwald, the journalist who first published documents leaked by former U.S. contractor Edward Snowden, said, "Venezuela is one of the very few countries with significant oil reserves which does not submit to U.S. dictates,” adding, "Such countries are always at the top of the U.S. government and media list of 'Countries To Be Demonized'."

Even the right-wing opposition in Venezuela is working to distance itself from Obama's interference.

Opposition lawmaker Ricardo Sanchez spoke in favour of a request by President Maduro for the National Assembly to pass an enabling law that will allow the country's president to act to protect the peace against recent threats made by the U.S.

“Whenever the government of the United States declares a country to be a threat to its national security, it is a preamble to military interventions in the future,” said Sanchez during an impassioned speech from the floor of the National Assembly.

Adding, “It is important to take a position during historic moments such as this one.”