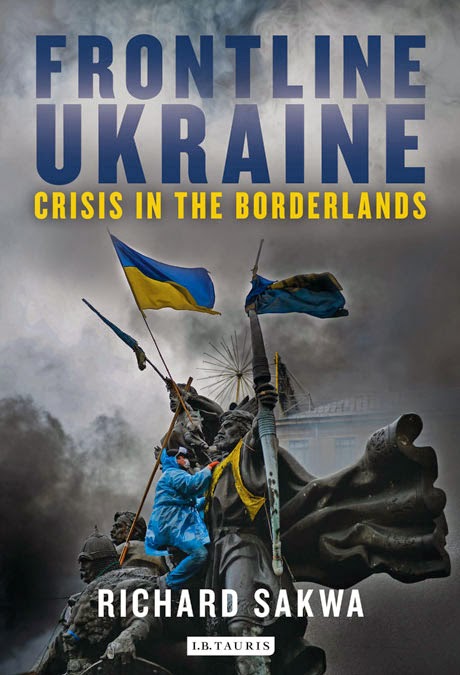 The Welsh Historian John Davies has recently died, but one of the last speeches he made last year in Scotland he congratulated the Scots for developing the notion of civic inclusive nationalism as opposed to an ethnic nationalism.

He correctly said that Wales still needed to develop further such an all inclusive concept.

At that time whilst we thought of Wales, we also thought of the Ukraine and how the nationalist movement there had taken a particularly ugly ethnic turn.

Therefore we were pleased to hear of the work of  the academic Richard Sakwa who has studied the internal and external contradictions in the Ukraine, albeit from a bourgeois perspective, rather than just seeing the conflict in terms of proxy forces with its consequent demonization of Russia and Putin.

Our own analysis of Ukraine owes much to the comrades of Borotba who are developing a revolutionary communist view, Richard Sakwa offers the best of the bourgeois rationalist view and is hence worthy of study.

Ukraine’s history is inextricably linked to Russia’s. In the east of the country especially, cultural, ethnic, economic, and historical links with Russia are deeply entrenched. It describes a fissure between east and west in which one half of Ukraine favours close and fraternal ties to Russia on the basis of those links, while in western Ukraine the dominant political current is anti-Russian and pro-West.

Professor of Russian and European Politics, Richard Sakwa, explores the two competing models of statehood that have arisen on the basis of this fissure in his recent book, Frontline Ukraine (IB Taurus 2015).

He describes the first of these as monist nationalism, involving the assertion of an ethnocentric identity that underpins a regeneration of the nation’s culture and social values along rigid and exclusionary nationalist lines.

The second he refers to as a pluralist model, denoting an inclusive Ukrainian identity that embraces the disparate and diverse peoples and ethnic groups who make up the country, a consequence of its “long history of fragmented statehood.”

These two contested models of statehood are being played out in the current Ukrainian conflict, which has been ramped up by the geopolitical stakes involved as Washington and its allies seeks to ‘contain’ Russia in a struggle over the continuation of the unipolarity enjoyed by the West since the collapse of the Soviet Union in 1991, or the multipolar alternative which Russia’s re-emergence as a global power demands.


Frontline Ukraine: Crisis in the Borderlands by Richard Sakwa review – an unrivalled account by Jonathan Steele

At last, a balanced assessment of the Ukrainian conflict – the problems go far beyond Vladimir Putin


When Arseniy Yatsenyuk, Ukraine’s prime minister, told a German TV station recently that the Soviet Union invaded Germany, was this just blind ignorance? Or a kind of perverted wishful thinking? If the USSR really was the aggressor in 1941, it would suit Yatsenyuk’s narrative of current geopolitics in which Russia is once again the only side that merits blame.

When Grzegorz Schetyna, Poland’s deputy foreign minister, said Ukrainians liberated Auschwitz, did he not know that the Red Army was a multinational force in which Ukrainians certainly played a role but the bulk of the troops were Russian? Or was he looking for a new way to provoke the Kremlin?

Faced with these irresponsible distortions, and they are replicated in a hundred other prejudiced comments about Russian behaviour from western politicians as well as their eastern European colleagues, it is a relief to find a book on the Ukrainian conflict that is cool, balanced, and well sourced.

Richard Sakwa makes repeated criticisms of Russian tactics and strategy, but he avoids lazy Putin-bashing and locates the origins of the Ukrainian conflict in a quarter-century of mistakes since the cold war ended.

In his view, three long-simmering crises have boiled over to produce the violence that is engulfing eastern Ukraine.

The first is the tension between two different models of Ukrainian statehood.

One is what he calls the “monist” view, which asserts that the country is an autochthonous cultural and political unity and that the challenge of independence since 1991 has been to strengthen the Ukrainian language, repudiate the tsarist and Soviet imperial legacies, reduce the political weight of Russian-speakers and move the country away from Russia towards “Europe”.

The alternative “pluralist” view emphasises the different historical and cultural experiences of Ukraine’s various regions and argues that building a modern democratic post-Soviet Ukrainian state is not just a matter of good governance and rule of law at the centre.

It also requires an acceptance of bilingualism, mutual tolerance of different traditions, and devolution of power to the regions.
More than any other change of government in Kiev since 1991, the overthrow of Viktor Yanukovych last year brought the triumph of the monist view, held most strongly in western Ukraine, whose leaders were determined this time to ensure the winner takes all.

The second crisis arises from the internationalisation of the struggle inside Ukraine which turned it into a geopolitical tug of war. Sakwa argues that this stems from the asymmetrical end of the cold war which shut Russia out of the European alliance system.

While Mikhail Gorbachev and millions of other Russians saw the end of the cold war as a shared victory which might lead to the building of a “common European home”, most western leaders saw Russia as a defeated nation whose interests could be brushed aside, and which must accept US hegemony in the new single-superpower world order or face isolation.

Instead of dismantling Nato, the cold-war alliance was strengthened and expanded in spite of repeated warnings from western experts on Russia that this would create new tensions. Long before Putin came to power, Yeltsin had urged the west not to move Nato eastwards.

Even today at this late stage, a declaration of Ukrainian non-alignment as part of an internationally negotiated settlement, and UN Security Council guarantees of that status, would bring instant de-escalation and make a lasting ceasefire possible in eastern Ukraine.


The hawks in the Clinton administration ignored all this, Bush abandoned the anti-ballistic missile treaty and put rockets close to Russia’s borders, and now a decade later, after Russia’s angry reaction to provocations in Georgia in 2008 and Ukraine today, we have what Sakwa rightly calls a “fateful geographical paradox: that Nato exists to manage the risks created by its existence”.

The third crisis, also linked to the Nato issue, is the European Union’s failure to stay true to the conflict resolution imperative that had been its original impetus. After 1989 there was much talk of the arrival of the “hour of Europe”.

Just as the need for Franco-German reconciliation inspired the EU’s foundation, many hoped the cold war’s end would lead to a broader east-west reconciliation across the old Iron Curtain.

But the prospect of greater European independence worried key decision-makers in Washington, and Nato’s role has been, in part, to maintain US primacy over Europe’s foreign policy.

From Bosnia in 1992 to Ukraine today, the last two decades have seen repeated occasions where US officials pleaded, half-sincerely, for a greater European role in handling geopolitical crises in Europe while simultaneously denigrating and sidelining Europe’s efforts.

Last year’s “Fuck the EU” comment by Victoria Nuland, Obama’s neocon assistant secretary of state for European and Eurasian affairs, was the pithiest expression of this.

Sakwa writes with barely suppressed anger of Europe’s failure, arguing that instead of a vision embracing the whole continent, the EU has become little more than the civilian wing of the Atlantic alliance.

Within the framework of these three crises, Sakwa gives the best analysis yet in book form of events on the ground in eastern Ukraine as well as in Kiev, Washington, Brussels and Moscow. He covers the disputes between the “resolvers” (who want a negotiated solution) and the “war party” in each capital.

He describes the rows over sanctions that have split European leaders, and points out how Ukraine’s president, Petro Poroshenko, is under constant pressure from Nuland’s favourite Ukrainian, the more militant Yatsenyuk, to rely on military force.

As for Putin, Sakwa sees him not so much as the driver of the crisis but as a regulator of factional interests and a temporiser who has to balance pressure from more rightwing Russian nationalists as well as from the insurgents in Ukraine, who get weapons and help from Russia but are not the Kremlin’s puppets.

Frontline Ukraine highlights several points that have become almost taboo in western accounts: the civilian casualties in eastern Ukraine caused by Ukrainian army shelling, the physical assaults on leftwing candidates in last year’s election and the failure to complete investigations of last February’s sniper activity in Kiev (much of it thought to have been by anti-Yanukovych fighters) or of the Odessa massacre in which dozens of anti-Kiev protesters were burnt alive in a building set on fire by nationalists or clubbed to death when they jumped from windows.

The most disturbing novelty of the Ukrainian crisis is the way Putin and other Russian leaders are routinely demonised.

At the height of the cold war when the dispute between Moscow and the west was far more dangerous, backed as it was by the danger of nuclear catastrophe, Brezhnev and Andropov were never treated to such public insults by western commentators and politicians.

Equally alarming, though not new, is the one-sided nature of western political, media and think tank coverage.

The spectre of senator Joseph McCarthy stalks the stage, marginalising those who offer a balanced analysis of why we have got to where we are and what compromises could save us.

I hope Sakwa’s book does not itself become a victim, condemned as insufficiently anti-Russian to be reviewed.