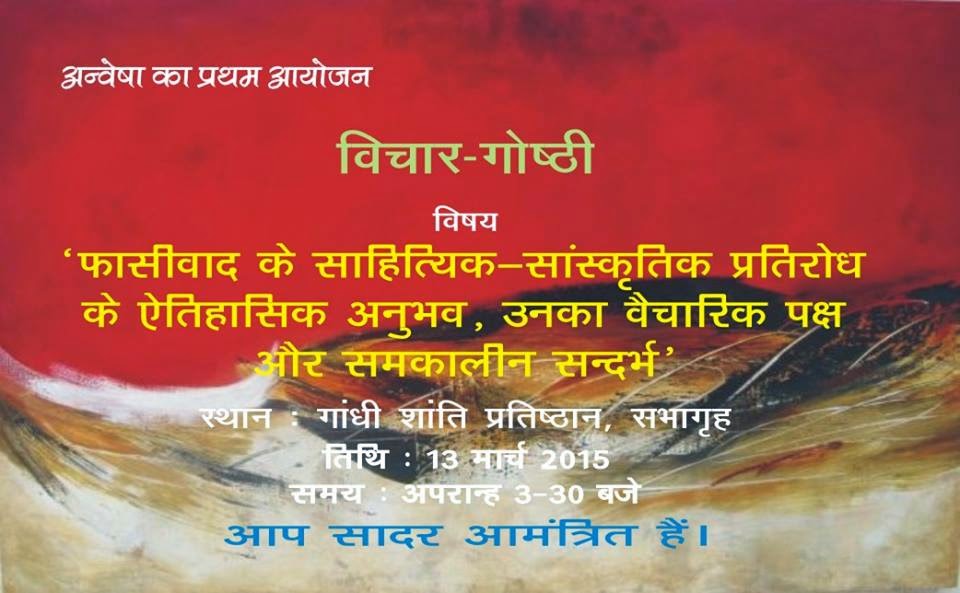 New Delhi, 14 March. The writers, journalists and cultural workers who gathered at a symposium organised by a pro-people forum ‘Anvesha’ reached on a consensus on the need that the writers-artists-intellectuals will have to come forward and take all the risks of expression in order to push back the increasing threat of fascism in the country.

With the assumption of power by Narendra Modi, while on the one hand the interest of ordinary people is being sacrificed to serve the interests native and foreign corporate houses, attempts are being made on the other hand to divide people through the communal campaigns such as ‘love jihad’ and ‘Ghar wapasi’ etc. and to poison the minds through the saffronisation of education and culture. A widespread and militant resistance is the need of the hour.

Poet Manglesh Dabral who chaired the symposium said that the ground for fascism has been prepared in the country ever since 1925 and after the victory of Narendra Modi, the Sangh Parivar has come to believe that now their time has come and hence their aggression is on rise.

A broad front consisting of all the leftist and pro-people writers-artists needs to be forged against this.

Now the stray actions of resistance is not enough. He said that there has been much depolitisation in the literary milieu of Hindi and it is our weakness. We need to take inspirations from the writers-artists throughout the world who fought against fascism despite being at the receiving end of barbaric attack.

Poetess Katyayani said that it is not a coincidence that in the last 25 years there has been an upsurge of the Hindutva fundamentalism and Islamic fundamentalism in response and in the same duration the neo-liberal economic policies have matured.

The fascist forces have managed to expand their mass base by posing an imaginary enemy before the common man who is shattered and perturbed by unemployment, inflation, anarchy and corruption caused by the economic crisis of the capitalist system and by presenting fake and simple solution to the problems.

In order to challenge them we too need to go to the ordinary people and expose the real character of fascists. Mere ritualistic protest activities among the middle class living in the metropolitan cities will not work, nor can their social base weaken by opposing them from the ground of ‘equal respect to all religions’.

We need to gain a correct ideological understanding of fascism. We have to understand the similarities and the differences between the fascism of the past which wrecked havoc in the world and the current fascism which we are witnessing today.

We need to understand that the earlier strategy of ‘popular front’ will not work today because none of the sections of the bourgeoisie today will stand along with us in a prolonged fight against fascism.

In order to fully understand the phenomenon of fascism, apart from the available Marxist writings we need to specifically read the writings of Bertolt Brecht, Walter Benjamin, Ernst Bloch and Adorno for improving our understanding of the ideological aspects of the cultural resistance against it.

Critic Vaibhav Singh said that the electoral democracy of India has been strengthening the foundation of the upsurge of fascist forces. What is needed today is a collective fight and the defense of each other’s commitment. The writers-intellectuals should not be under any illusion that those who are less political or less vocal would escape the attack of fascist forces.

Journalist Abhishek Srivastav said that we have to examine as to why the fascist forces managed to bring a substantial section of the Indian population to their fold. An effective fight against fascism can be waged only after understanding the relation between the financial crisis and fascist upsurge and the politics and culture of fascism.

Journalist Panini Anand said that continuous attempts are being made by the fascist forces to deprave, deviate and purchase those who are opposing them. We not only need to focus on preventing the attacks on people but also on the weaknesses and opportunism arising in our midst and we need to draw a clear dividing line.

Kavita Krishnapallavi, the convenor of ‘Anvesha’, said while introducing the subject that the new upsurge of fascism is not just a repetition of the fascism of the third-fourth decade of the last century.

Since capitalism today is passing through a phase of prolonged recession which is marked by partial revival followed by severe crisis, the dividing line between bourgeois democracy and the naked ultra-rightist bourgeois dictatorship is somewhat getting blurred and the societies spanning from advance capitalist USA to the backward capitalist India are increasingly becoming fertile ground for the rise and growth of fascist organisations and fascist movements.

The question of pushing back the Hindutvaite forces is not a question of electoral victory-defeat. It is an ultra-reactionary socio-political movement which has been built through a cadre-based fascist organisational machinery. The fight against it will be a long one. We will have to counter them at the cultural front through regular cultural activities, alternative cultural institutions and various art forms and we will have to abandon the ritualistic and defensive attitude.

A joint front of these three kinds of movements is needed to defeat fascism. The challenge before us is what would be the theoretical basis for any such front.

Poet Ranjeet Verma said that Mussolini had termed fascism as a consequence of the nexus between corporate capital and state power. This is clearly visible after the assumption of power by Narendra Modi. It is to serve their interest that today attempts to divide people in the name of religion, caste, region are on full swing, we need to stand united against them.

Journalist Amlendu Upadhyay said that we need to see that the current fascist upsurge is closely linked with identity politics.

In fact, the Hindutvaite politics in India has carved its place by riding on the back of identity politics.

Today while opposing the land grab law of Modi government we must not forget what kind of tactics were used by Mayawati government in Uttar Pradesh to grab the land from farmers for the benefit of industrialists and builders.

Vineet Tiwari from Madhya Pradesh stressed on the need to forge a broad front against fascism. Referring to the recent murder of Govind Pansare and widespread protest against it he said that mere tokenism is not enough to counter fascism, we need to form a collective cultural strategy of militant struggle.

Anand Singh, member of Anvesha’s convening body, said while discussing the history of the upsurge of fascism that the crisis of financial capital and the falling rate of profit has been forcing the capitalist class to go for the alternative of an authoritarian rule which could serve its interest by crushing all its opposition.

The coming into power of Modi government in India needs to be looked in relation to this crisis only. If we are to wage a resilient fight against fascism we need to have a clear vision on its ideological aspects as well.

Copious writings are available on fascism from Marxist viewpoint, whose reading will help us to devise a correct strategy. We must study the writings of Gramsci, Togliatti, Dimitrov, Lukacs, Clara Zetkin, Rabinbach, Kunhl, Kurt Gossweiler, Mical Kalecki, Tim Mason etc on fascism.

Lata Kumari from JNU while presenting various examples of the militant struggles by poets-artists against the dictatorial rules in Latin America stressed on the need to build a strong cultural movement in India as well which should have links to people. Sudeep Sahu from Ghaziabad also expressed his views.

Satyam, who moderated the symposium, said that the crisis of capitalist system today is causing the upsurge of the neo-fascist political forces in several countries including Greece, Ukraine, Italy and USA as also the emergence of goonda gangs such as Boko Haram, IS and Hindutvaites.

With the deepening of this crisis the acts of arson and vandalism by these forces will increase even in India.

"In order to fully understand the phenomenon of fascism, apart from the available Marxist writings we need to specifically read the writings of Bertolt Brecht, Walter Benjamin, Ernst Bloch and Adorno for improving our understanding of the ideological aspects of the cultural resistance against it."

If you are serious about fighting fascism, you need to 1) correctly identify whether India is actually fascist 2) find your own way to fight.
Europe cannot help you! believe me. We Europeans look to you to push the movement forward.

The anti Communalist ideas of Bhagat Singh and the

Should form basis of anti Fascist work in India not the revisionism of the Frankfurt School - I agree with previous comment.