Today their role and teachings are more significant in light of the attack of Hindu communal fascism.

Some significant programmes were in Delhi and Punjab held by organizations, lighting the torch of Shaheed Bhagat Singh and reverberating his message.

I compliment such democratic revolutionary forces for painstaking efforts who could convert a spark into a prairie fire.

I just attended a convention opposing communalism on the 84th martyrdom anniversary of Shaheed Bhagat Singh,Sukhdev and Rajguru.in Ludhiana on March 22nd.I was tremendously impressed by the organization and response of workers in Ludhiana.

Leaflets were distributed, street corner meetings held, cycle rallies held, speeches made and plays staged.. Keen response was evoked amongst the working class who seemed to understand the divide and rule policies of the ruling classes. and how communalism was used as a weapon to break their struggles for genuine demands.

I was impressed with the enthusiasm of the youth and the workers and the discipline of the cadre.. It was heartening that several women also participated in the convention.

The slogans raised were “Down with Communalism”, “Long Live Peoples Unity”, and “red salutes to the martyrs and continue their struggle forever.”

Speakers narrated how today the forces of the world capitalist system were accentuating the capitalist exploitation of workers in India.

They explained how Hindu communal fascism was the primary weapon of all democratic movements and to combat it all sections of the society must be united mobilised ,be it Hindus, Muslims or Christians or any other religion.

They also emphasised that revolutionary class struggle and movements must be built to combat the menace of communalism and not just propagating brotherhood of all religions.

They highlighted instances of how even factory struggles were divided by communal leaders in Punjab deploying the Hindu-Sikh divide.

They explained how burning issues of the masses like price –rise ,employment, housing, food,  transport electricity and rations were diverted and labour laws were introduced to suppress the struggles of workers.

They narrated how fascist the R.S.S .was and how the tentacles of Hindu fanaticism were used and how Hindu communalism is spreading in a more organized form.. They also condemned Muslim and Sikh fundamentalism..

The new Modi government has sharpened the thread of Hindu communalism. and the attacks on Muslims and Christians and communal poisoning was deepened.

They explained how the administration or the state’s forces could not be used to oppose communal riots and often the police colluded with forces like the Vishwa Hindu Parishad. They stressed on the attacks of communal fascism on women.

The speakers could relate to the problems of the day to day lives of the workers and their connection with fighting communalism.

Comrade Rajwinder in detail described how rulers and industrialists divided the struggles of workers after making false promises and sanctioned economic policies to break their struggles. He gave concrete examples of the tricks the Industrialists used conniving with the politicians.

I am sorry that a translation was not made of all the speeches of the speakers. Some significant points wee also made by Harjinder Singh on how in the days of Khalistani terrorism Sikh fundamentalism was fought by revolutionary Trade Union struggle.

Unlike other speakers he called for supporting the peasant struggles and narrated past struggles of the electricity workers . The message of the fighting the menace of communalism lit a flame in the hearts of the workers attending the convention.

Around 500 workers participated. Such gatherings are need all over India to light the flame of Shaheed Bhagat Singh. 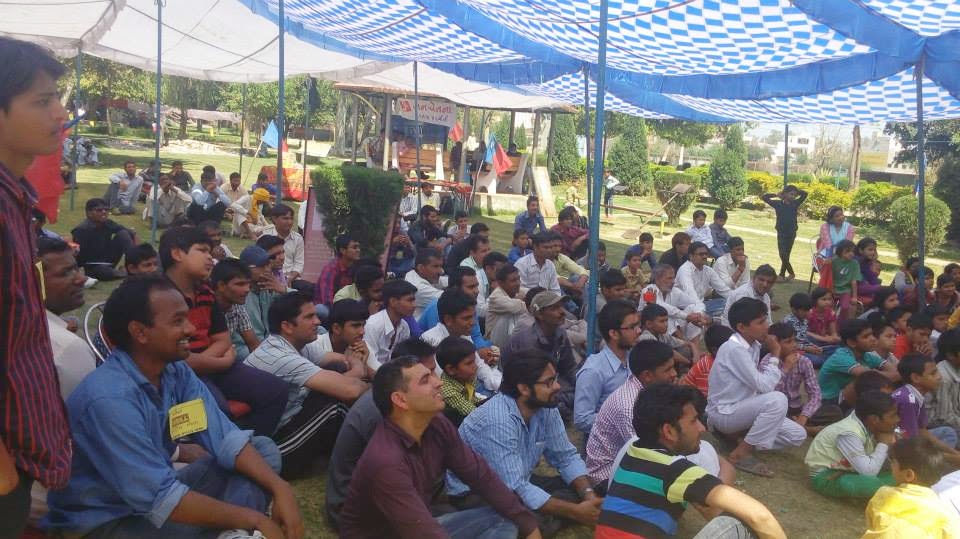 Workers,students, women and children participated in large numbers. The participation of children was heartening in light of the current offensive of Hindu fascistic propaganda in primary schools and they could identify with the message of Bhagat Singh.

They may not have been quantitatively big but qualitatively they were of high class. They could tap the hearts and evoke the message of the martyrs to the workers of those areas in light of the repressive economic policies of the government and their nexus with Hindu communal fascism.

Street plays were performed, films were shown , prabhat pheris held and finally on the last day a torchlight Shaheedi rally was staged.

In Delhi certain Hindu communal goonda .elements with the blessings of the administration attempted to sabotage the campaign but the activists resisted.

A youth activist was badly attacked by the communal goondas.

The administration connived with the communal elements. Threats were particularly given to female workers.

In fact on the 1st 2 days the police or administration tried to deny permission to the stage but the resistance of the activists enabled the programme to be staged. The programme received enthusiastic support from the workers children and women whose unity thwarted the attacks of the goondas.

It was an ideal example of how the tentacles of communal poison were strengthened by the present government and of the possible times to come. In Mumbai in Mankhurd area NBS stage a cultural programme with a street play and  for 3 days ran a leaflet distribution campaign.

It was significant that it was held in an area of the industrial workers.

The programmes taught us that even if the strength of forces are small qualitative work is a trump card. The numbers may not have been many but the seeds sown were of great texture.

I wish that such a convention received more support from other democratic revolutionary forces of Punjab and from other parts of the country.

I thank comrade Lakhwinder of Karkhana Mazdoor Union and Kavita Krishna Pallavi and Anand of Shaheed Bhagat Singh Pustakalya for reports which I translated.

I particularly thank Lakhwinder for his endorsing my personal participation. regards Harsh Thakor. 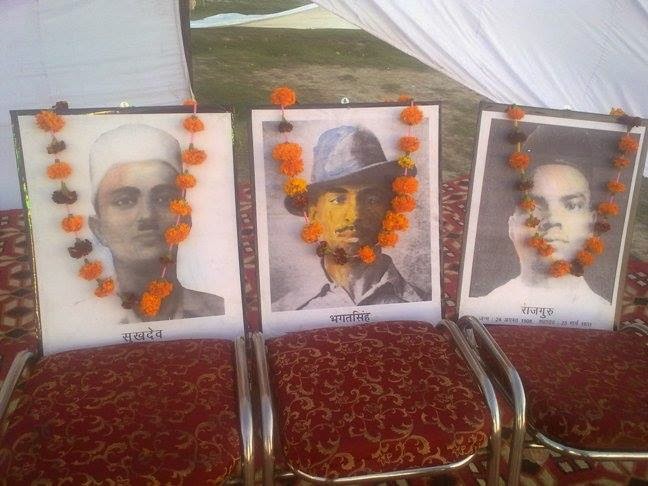 
Its important to combat fascism. particularly important in this regard is the analysis of the RCP USA regarding its homegrown Christian Fascist movement, which like the Hindu Fascists are completely reactionary. I would like to recommend to comrade Harsh Thakor this article, which is about 'Away with All Gods', which is a sustained polemic against religion. Indian Communists would do well do well to learn from Avakian. check this out: