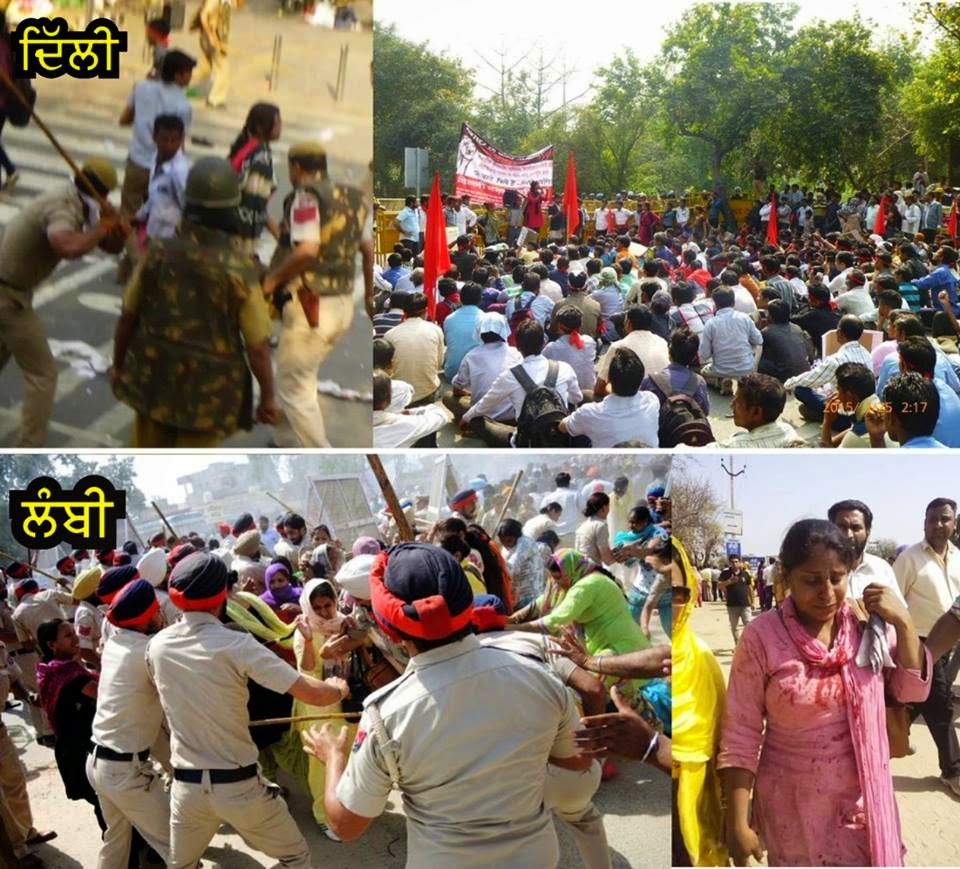 A workers rally was attacked in Delhi today protesting against AAP.policies.Delhi police today brutally lathi charged and tear gassed hundreds of Delhi workers and students who had gathered at the Delhi secretariat to remind the Kejriwal govt about its promises.

Scores of workers and activists, including women, have been badly injured, some of them have suffered serious head injuries.

Several leading workers and activists have been arrested, including Abhinav, the editor of workers paper Mazdoor Bigul and Shivani, legal advisor of the Delhi Metro Contract Workers Union. Police have even broken the cameras and mobile phones of local journalist and individual persons covering the protest.

No medical treatment is given to injured workers inside police station and 2-3 leaders of workers are still being brutally beaten  inside station. 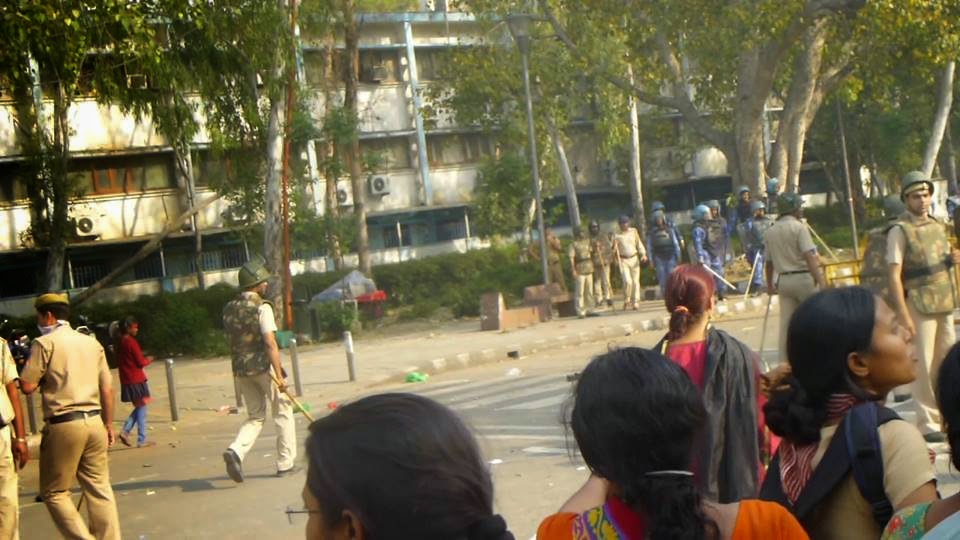 PUDR strongly condemns the brutal lathicharge by Delhi Police on a workers’ demonstration on 25 March 2015 when nearly 1000 workers and activists belonging to different unions (Wazirpur hot rolling steel industry, Delhi Metro Railways Corporation, Karawal Nagar almond workers, safai karamcharis of Dr. Hedgevar and Babu Jagjivan Ram Hospitals and several unorganized workers from Khajuri) had gathered outside the Delhi Secretariat to meet the Labour Minister in order to present a memorandum of demands.
Several university students had also joined the demonstration. The demonstration peacefully waited for four hours but the minister did not meet them. Instead, they were attacked by the police who used several rounds of tear gas and lathicharge against them.
While the lathicharge was indiscriminate and brutal, certain activists and workers, including female activists, were particularly targeted and attacked by male policemen.
The head injuries sustained by at least two shows that the aim of the police was not to disperse but to attack.
Later, when the workers re-assembled at Rajghat, they were again lathicharged. 5 workers/activists have sustained injuries including one who has had a fracture. 17 activists including 4 women have been arrested on charges of rioting and for participating in an unlawful assembly with common object and obstructing public officials from discharging duty (s. 186, 353, 147, 148, 149, IPC).
The arrested persons have been detained in Indraprastha Estate Police Station. This is the second attack carried out by Delhi Police in less than a month's time.
On 5th March 2015, hundreds of contract workers who had demonstrated outside the Secretariat, under the banner of Delhi Metro Rail Contract Workers Union, were brutally lathi charged and several were seriously injured.
The Labour Minster was forced to meet a delegation then as the workers refused to disperse. However, unlike then, this time not only did the Government not meet any of the protesters, the police has also arrested some of the prominent faces within the demonstration.
Quite clearly, yesterday’s attack was premeditated and was meant to intimidate the workers from protesting any further. By using the old strategy of charging protesters with lawlessness—by attacking, detaining and forcing them to face criminal charges—the Kejriwal Government has exposed its class character and complicity with the police.
Not only has the Government refused to honour its election promise, of regularizing contractual work, it has deliberately turned a peaceful workers’ demonstration into law and order problem and encouraged the police to attack protesters and arrest them.
It is shocking to note that a Chief Minister, who is a believer in the right to protest and dissent, has such animosity towards legitimate protests against his Government. PUDR strongly condemns the police actions and demands an immediate and unconditional release of all 17 persons.
PUDR demands action against male policemen who targeted women activists and attacked them. Megha Bahl, Sharmila Purkayastha (Secretaries)
26th March 2015 www.pudr.org Section: Denial of Justice Worker Undemocratic Laws
Posted by nickglais on 3/26/2015 10:36:00 AM