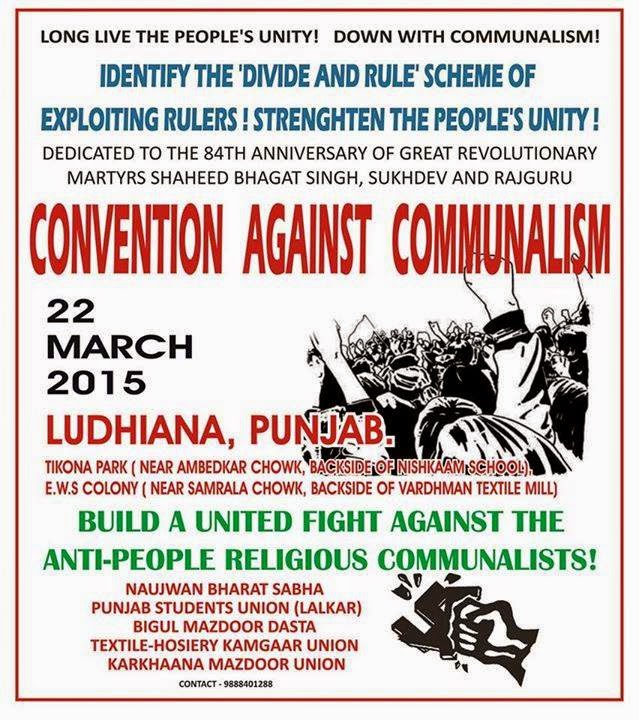 The forming of a right-wing BJP government at the centre has multiplied the threat to communal harmony in India. Various right-wing outfits ( RSS, Vishwa Hindu Parishad, Hindu Yuva Vahini etc. ) with direct political support at their helm, have increased their activities manifold. From organising 'Ghar Vapsi' programs to inciting direct riots, these outfits have spared no tactic to divide people along religious-caste lines.

Such things do manage to turn the focus of people away from their real economic-social issues, even if for a small period.

The need of the hour today is to build a strong democratic, secular unity of all the progressive forces.

The need today is to expose these right-wing, communal forces and to organize the masses on their real economic-social issues.

With exactly this aim in mind, various democratic organizations of Punjab have undertaken a vigorous month-long campaign to reach out to the masses and build a strong democratic force.

These organizations are holding a Punjab-level conference on March 22, 2015 at Ludhiana to provide a platform for all the peace-loving people of state to join hands together, against the communal elements.

Coinciding with the 84th anniversary of great revolutionary martyrs ( Shaheed Bhagat Singh, Sukhdev and Rajguru ), this event aims to provide a befitting tribute to the legacy of these great martyrs.

A compaign against cummunalism is going on in various parts of Punjab. Two leaflets have been published for this compaign. Link of feaflet of Convention Against Communalism - https://leafletldh.wordpress.com/convention-against-commun…/

Article ‘Communal Riots and their Solutions’ written by great revolution martyr Bhagat Singh is also published as leaflet. Link of this leaflet- https://leafletldh.wordpress.com/communal-riots-and-their-…/
ANTI COMMUNAL RIOTS AND THEIR SOLUTION BY BHAGAT SINGH 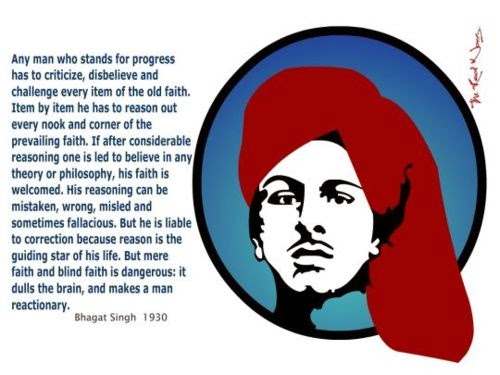 The condition of India has now become pathetic. The followers of one religion have become bitter enemies of the followers of the other religion. The enmity between the people of religious groups have increased so much so, that to belong to one particular religion is reason enough for becoming enemy of the other religion. If someone has any doubts about the seriousness of the situation, they should look at the recent riots of Lahore. How Muslims killed innocent Hindus and Sikhs and how Sikhs have been unsparing in their killings. These mutual killings have not been resorted by the killers to award punishment to someone found guilty of some crime, but for the simple reason that someone was either Hindu, Sikh or Muslim. For Muslims, it has been enough to kill if someone was either Hindu or Sikh and likewise to be a Muslim was sufficient argument for him to be killed. In this situation, God alone knows what will happen to India.

Today India’s future seems extremely bleak. These religions have screwed India and one does not know when India will be freed from these communal riots. These riots have shamed India at the world stage and we have seen that in the deluge of superstitions, everyone gets swept away. During these riots, hardly do you see examples of a Hindu, Muslim or a Sikh who keeps his head cool while the rest pick up rods, sticks, swords and knives to maintain their dominance and eventually kill each other in this pursuit of dominance. Then there are some who get hanged and others who are thrown in prison. After all this bloodshed, the English Government shines its rod on these “defenders of religion” which seem to cure their mental illness.

We have heard this joyous news that the youth of India are now fleeing away from those religions which teach hatred and communal violence. They have become so open in their outlook that they don’t look at people as Hindus, Muslims or Sikh but first as a human being and then as Indians. With the rise of these thoughts in the youth of India, I see hope for the future of India. Indians should not get upset at the news of these riots, but they should seek to not built a communal environment which results in riots.
The martyrs of 1914-15 had separated religion from politics. They understood that religion is the personal matter of an individual which needed no interference from other. But they all agreed that religion should not enter politics because it does not allow people to work together for a common cause. This was the reason why during the revolution called by ‘Gadar Party’, people remained united. Here Sikhs, Hindus and Muslims were put on gallows for the cause of revolution.
Today there are new politicians who have entered the fight for freedom, who want to separate religion from politics. This is a beautiful way to cure the malaise of communal violence.
Even though we have different religious beliefs, if we separate religion from politics we all can stand together in the matter of politics and national cause.
We hope that the true sympathizers of India will think over our solutions and will save India from following the path of self-destruction.