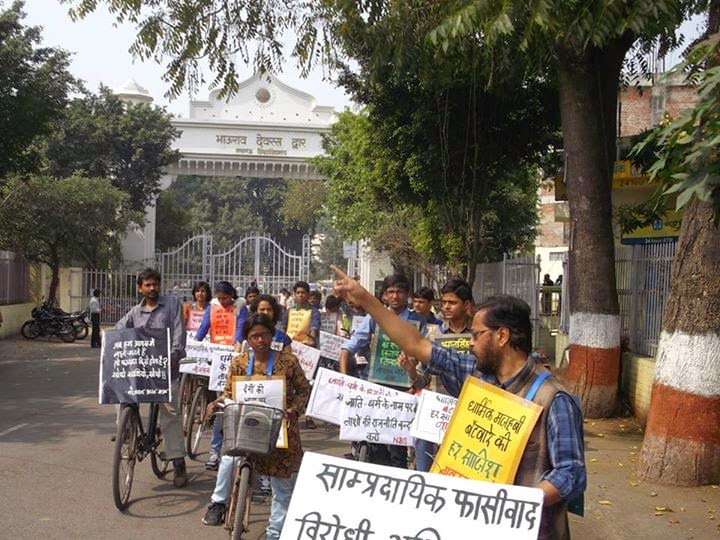 From 25th February to 27th February in Lucknow in Uttar Pradesh a sustained anti-communal campaign was carried out in memory of anti-colonial martyr Chandrasheka Azad’s’s 80th martyrdom year by Naujwan Bharat Sabha, Stree Mukti Leage and Jagrut Nagarik Manch of Uttar Pradesh with a series of cycle rallies, plays, speeches and street-corner meetings..

It had great relevance in the present political scenario where the trend of Hindu communal fascism is playing havoc with the lives of people.

The R.S.S.and B.J.P.was particularly exposed with their slogans of ‘Hindutva’ and ‘Love Jihad.’and the corporate agenda curtailing worker’s rights.

Just a few months ago similar programmes were carried out in Delhi,Punjab and Haryana against communal forces,particularly in working –class bases.

What is significant is that it reached the population of Muslims in residential areas dominated by them.

A huge number of street plays of late Comrade Gursharan Singh were performed and handbills distributed.

The play superbly depicted the rule and divide policies of the ruling class parties and how they diverted people from their basic issues.It was explained that communal unity was the need of the hour when the rulers were playing a rule and divided game.

Speakers explained how the present B.J.P.Hindu communal regime ‘s economic agenda was completely pro-rich and made every provison to suppress the struggles of common people to fight for their burning issues.

They explained how communal tyranny made people hapless victims in the past like in Godhra in 2003 and in Ayodhya in 1992.It called on people to resist the communal Hindu fascistic forces with sustained class struggle.What was heartening is that it got significant response.

I witnessed the eagerness in people’s eyes and how they could identify with the programmes.

In Lucknow University campus goons of the Akhil Bharatiya Parishad arrived to disrupt the programme but they were thwarted by the rage of the students against Hindu communalism.

It is significant that the police disallowed officially distributing the leaflets and hoisting placards and the programme had to be done without leaflets initially.

It is significant that just some months ago a students was expelled from the college for participating in anti-Hindutva campaigns.

Later on it went to the high court area,areas of old Lucknwow which were intensely populated.On the final day the programme was launched in shiah degree college,Daliganj railway station and culminated in the predominantly Muslim area of Khadra.

What is significant that earlier the Naujwan Bharat Sabha undertook a similar programme in Ambedkar Nagar in Allahabad.

The NBS also organised protests in rural areas against issue of unemployment in Allahabad,against fee hikes in hospitals and better facilities ,against the Geeta press in Gorakhpur not paying their workers salaries

.It also led protests against the assassination of Nraendra Dabholkar,amassing wealth by religious sadhus,dirty and polluted water and shortage of rooms in hostels with goonda domination.

Units of student organization Disha were formed.The Stree Mukti league took up an issue of a girl being burnt by petrol.One rally waso organized in a joint front with S.F.I.,A.I.D.S.O, which was countered by the A.B.V.P.

Naujwan Bharat Sabha secretary of Uttar Pradesh Prasen explained how after the 1st convention of NBS it was decided to launch a sustained campaign exposing the real agenda of the present Hindu communal regime and organize people on class issues.

He also stressed on the importance of differentiating between a Marxist Leninist party and a revolutionary mass organization.

He also elaborated on how libraries were formed promoting progressive literature for youth and that daily Prabhat Pheris were launched from early morning promoting revolutionary ideology.Prasen also felt that the village landless workesr should be organized.

It is significant that it does not campaign for candidates in election campaigns like youth organizations of revisionist parties like C.P.I,C.P.M.,C.P.I.(M.L.)Liberation.C.P.I.(M.L.) Red Star etc.

I was impressed by the discipline,vigilance and commitment of the comrades even if they were not more than 25 participating.

It was heartening that so many women comrades participated.

Such forces even if small in size ,light the red candles and give birth to the revolutionary movement, rekindling the flame of Shaheed Bhagat Singh.Youth all over Indy should imbibe his teachings and reverberate his secular spirit. 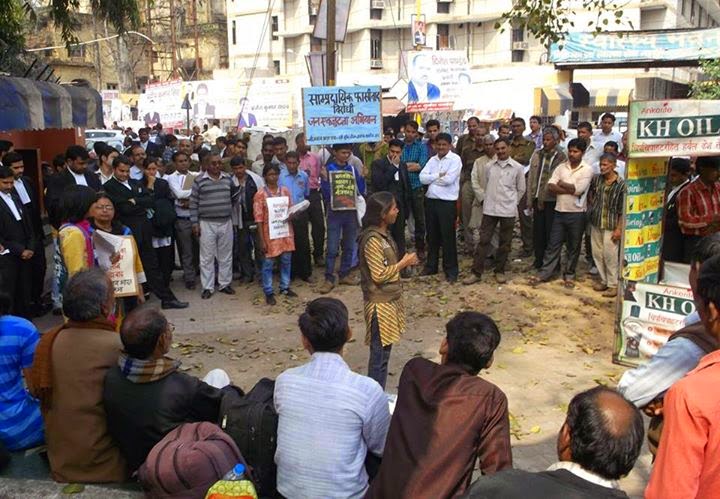 Chandra Shekhar Azad (1906-1931)
Chandra Shekhar was born on 23 July 1906 in village Bhavra in Jhabua district of Madhya Pradesh to Pandit Sita Ram Tiwari and Jagrani Devi. He received his early schooling in Bhavra. For higher studies he went to the Sanskrit Pathashala at Varanasi.
Young Chandra Shekhar was fascinated by and drawn to the great national upsurge of the non-violent, non-cooperation movement of 1920-21 under the leadership of Mahatma Gandhi. When arrested and produced before the magistrate, he gave his name as 'Azad', his father's name as 'Swatantra' and his residence as 'prison'. The provoked magistrate sentenced him to fifteen lashes of flogging. The title of Azad stuck thereafter.
After withdrawal of the non-cooperation movement, Azad was attracted towards revolutionary activities. He joined the Hindustan Socialist Republican Army (HSRA) and was involved in the Kakori Conspiracy (1926), the attempt to blow up the Viceroy's train (1926), the Assembly bomb incident, the Delhi Conspiracy, the shooting of Saunders at Lahore (1928) and the Second Lahore conspiracy.
Azad was on the wanted list of the police. On 27February 1931, in the Alfred Park, Allahabad, when an associate betrayed him, well-armed police circled Azad. For quite sometime he held them at bay, single-handedly with a small pistol and few cartridges. Left with only one bullet, he fired it at his own temple and lived up to his resolve that he would never be arrested and dragged to gallows to be hanged. He used to fondly recite a Hindustani couplet, his only poetic composition: