Ukraine's uprising against Nato, neoliberals and oligarchs - an interview with Boris Kagarlitsky by Feyzi Ismail for Counterfire 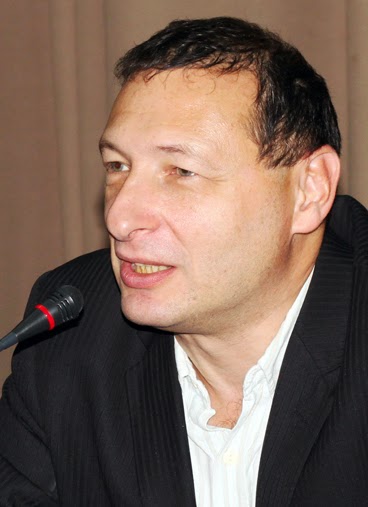 Democracy and Class Struggle publish this interview for information - we do not endorse all of Boris Kargalitskys views but we value his analysis.

We have also recently be made aware of slanderous attacks on Boris Kargalitsky by liberals especially by Anton-shekhovtsov who is smearing him as a fascist collaborator and Putin's agent for his analysis of Ukrainian crisis.

While we have disagreements with Boris Kargalitsky we reject those outrageous smears on Kargalitsky from this man Anton-shekhovtsov who basically is funded by George Soros and peddles the philosophy of Michael J Sandel a receipient of Goldman Sachs award.

Kargalitsky is with the people Anton - Shetkhovtsov is with the enemy !
If in doubt look at Anton - shekhovtstov's facebook and you see him providing a link praising the Azov Battalion of the Social National Assembly of Ukraine which even mainstream publications call this battalion Nazis - so much for George Soros and the bought and paid for Anti Fascism of fools. Smash Ukrainian Fascism and its apologists like Anton - Shetkhovtsov the real enemy within.

Despite the ceasefire the crisis in Ukraine is far from resolved. Feyzi Ismail talks to Russian Marxist and dissident Boris Kagarlitsky about the background to the current situation

What are the origins of the crisis in Ukraine and why has the conflict erupted in recent months?
The origins of the crisis in Ukraine are threefold. The first thing is that Ukraine was designed by planners from Moscow as one element in a complex planned economy. The territories that form Ukraine were put together not because of any historical, cultural or ethnic reasons, but to organise complex planning – they wanted to link the industrial areas in the east with ports in the south, such as Odessa and Crimea, together with the agrarian west. That was the logic. Once this logic was destroyed with the end of the Soviet Union, this territory as an integrated unity started falling apart, and lost its raison d’être.
The end of the Soviet Union also allowed cultural divisions to flourish, which is the second source of the crisis. Differences over language, for example, became much more important than before. Nationalist policies to impose a single Ukrainian language were absurd, however, because there are far more Ukrainians who speak Russian than Ukrainian – about a third are ethnic Russians and another third identify themselves as Russian-speaking Ukrainians. There are many people who speak both languages equally, but Russian is much more widespread than Ukrainian, and was even on the rise in the post-independence period. This is because the world market favours the dominant language, the language of business, trade and production. The market system increased existing contradictions within society and created the preconditions for more cultural conflicts. The liberal media, however, presents these conflicts as purely cultural, while in fact the underlying reasons are related to the economy and institutions.
The third aspect of the crisis relates to the Ukrainian economy. In the post-Soviet period, Ukraine became an oligarchy in the same way as Russia, but with fewer resources. The quantity of resources that Russia possessed allowed Putin to create a system of permanent and self-reproducing compromise. Putin’s rule is based on permanent consensus-building, first among the elites and, once there is an elite consensus, then an attempt is made to ensure this consensus acceptable to the rest of the population through welfare measures and so on. The idea is to focus on consumption – as compensation for a lack of political activity – and everybody is more or less happy. But the Ukrainian oligarchy has never had enough financial and material resources to facilitate such compromise. Unlike Russian oil, Ukrainian steel is much more vulnerable on the world market. This has led to permanent conflict between different oligarchic clans for control over existing public resources, which was the basis of so-called Ukrainian democracy. In that sense Ukraine is a typical oligarchic republic, in that it denies access to politics for ordinary people, but at the same time generates real pluralism for the oligarchy. This system had its crises, but after every single crisis they managed to establish one or another compromise, and these were not terminal for political stability. That is, until the global economic crisis in 2008.
This crisis not only undermined the capacity of the Ukrainian elite to achieve compromise but it also brought in new players such as the EU, the US and Nato. Given the level of crisis in the West, the important factor for stabilising the system became its expansion. And the EU is very much in trouble, especially in the south – the capacity of these societies to reproduce themselves is so undermined by neoliberal policies – that you can hardly say how to keep these societies functioning without moving away from neoliberalism. But this is precisely what the neoliberal elites are not going to allow. The only chance to escape or solve these contradictions is to expand the system, and shift more resources into the system.