India: On September 17th,2014 one of the biggest ever gatherings ever took in the revolutionary peasant movement, in the Moga district in Punjab. It was jointly held by the Bharatiya Kisan Union-Ekta(Ugrahan) and the Punjab Khet Mazdoor Union by Harsh Thakor On September 17th,2014 one of the biggest ever gatherings ever took in the revolutionary peasant movement, in the Moga district in Punjab. It was jointly held by the Bharatiya Kisan Union-Ekta(Ugrahan) and the Punjab Khet Mazdoor Union. About 18,000 peasants mainly of the B.K.U.assembled at the venue swarming in like a shoal of fish. This gathering has important significance to the revolutionary peasant movement in Punjab which is facing the wrath of repression.

The main demands voiced were :

1.Opposing of all drugs and drug promotion policies encouraged by the Punjab state govt. Thousands.Thousands of youth have become victims of drug addiction which has received the patronage of the ruling class Akali govt.

2. Opposing water pollution. Today the lakes and rivers are infested with the pollution from factories of imperialist and ruling class creations which protect the vested interests.

5.compensation of 5 lakhs each to familes with peasant suicides.Today the govt has only given one lakh.

6.awarding plots to dalits or agricultural labourers which were promised.

Today the B.K.U.(Ekta-Ugrahan) is the strongest peasant organization In Punjab which normally constitutes about 75% of the participants in the major revolutionary force’s gatherings or rallies. It has built units in Faridkot,Malwa,Moga, Bhatinda, Faridkot, Sangrur,Mansa and Barnala.The biggest force amongst the landless labourers organization is the Punjab Khet Mazdoor Union about 1/4th the size of the B.K.U.which has secured important victories for the landless labourers in terms of plots and rehabilitation schemes.It is active in Muktsar,Bhatinda,Faridkot,Moga Jalandhar.The main problem the P.M.K.U faces is shortage of leaders as their activists are burdened by economic problems.and their cadre do not possess sufficient political consciousness. The .P.M.K.U.won a demand for 33 % concession for portion of panchayat lease, only for agricultural labour. Overall it is also developing strongly.
The .B.KU (ugrahan) is withstanding the state repression like a great army battalion but still hardly receives enough support of the youth sections. However it's secretary Sukhdev Singh Khokri believes it will resist the onslaught of state repression, and build itself. He emphasized that only a people’s movement would defend the hard won rights and not the opressive system. He stated that the B.K.U(ugrahan)implements decisions on it's independent initiative not being affiliated to any Marxist-Leninist group and has developed strong democratic sense of functioning. .
Another important development is the activity of the youth organization,Naujwan Bharat Sabha.On August 23rd and September 1st it took out a vicious opposition campaign opposing the exploitation of wine shop owners who encouraged the wine trade .In Moga the NBS protested illegal methods deployed by wine shop owners to hoodwink the common man.The NBS also took a continuous campaign against drugs explaining the youth how the government used the sale of drugs to divert the people from relating to their grassroot problems.It is now conducting a vociferous campaign in support of the rally to be held in Barnala on October 1st protesting against the black laws.

Let the red flame of revolutionary peasant movement in Punjab rekindle all over ! 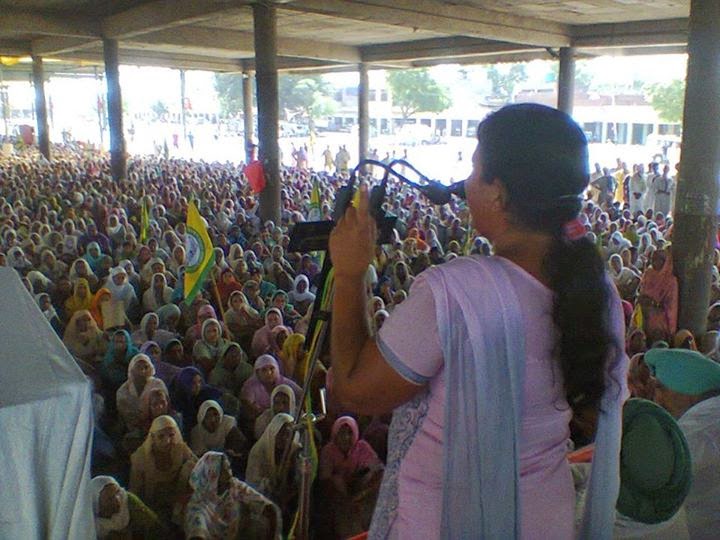